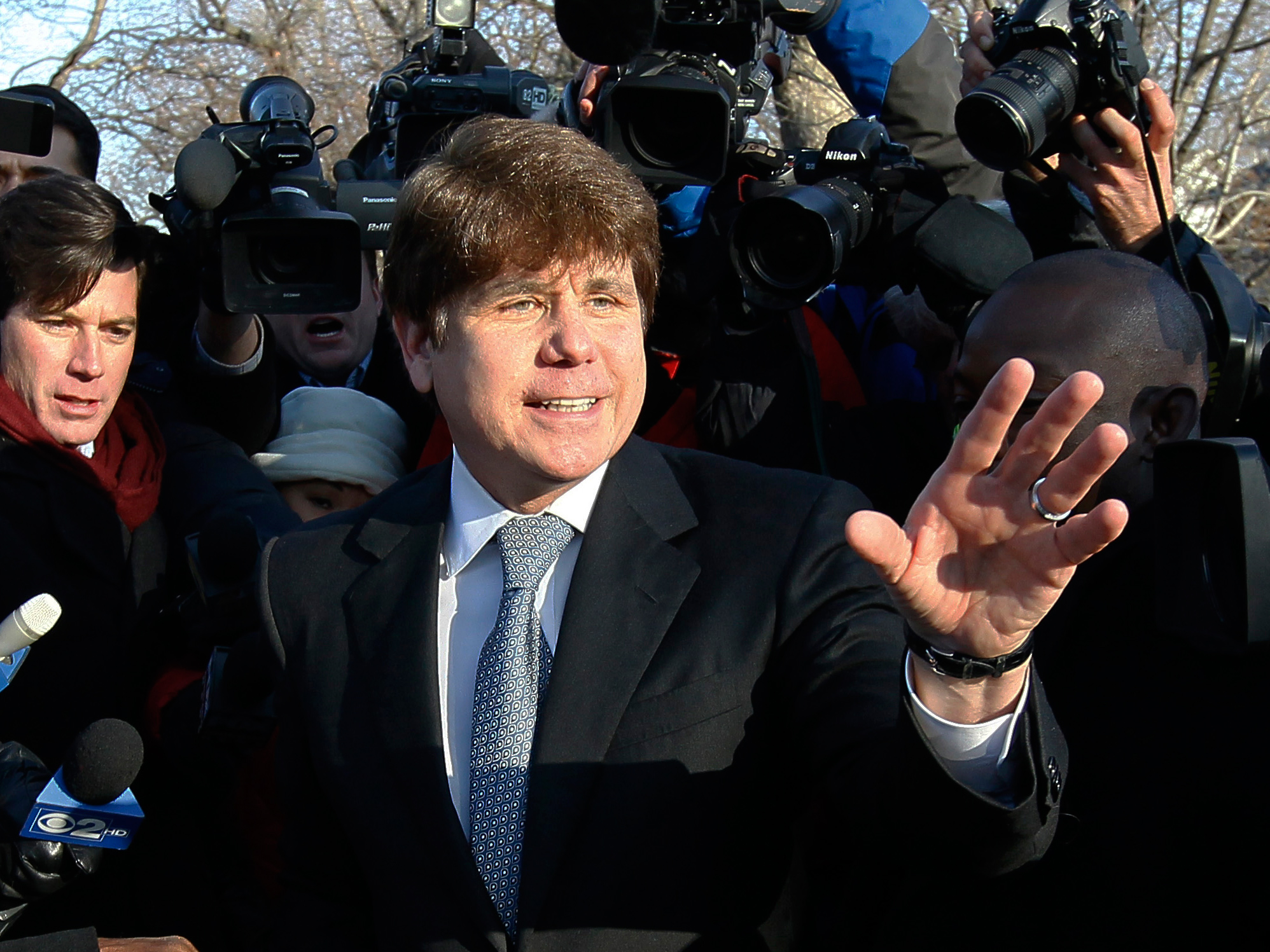 Rod Blagojevich, the ousted Illinois governor whose three-year battle against criminal charges became a national spectacle, was sentenced to 14 years in prison Wednesday, one of the stiffest penalties imposed for corruption in a state with a history of crooked politics.

Blagojevich's 18 convictions included allegations of trying to leverage his power to appoint someone to President Barack Obama's vacated Senate seat to raise campaign cash or land a high-paying job.

The twice-elected Democrat is now the second former Illinois governor in a row to be sentenced to prison, and the fourth Illinois governor in the last four decades. His Republican predecessor, George Ryan, currently is serving a sentence of 6 1/2 years, also for corruption.

Blagojevich had told the judge that he made "terrible mistakes" and acknowledged that he broke the law when he tried to sell an appointment to the Senate seat.

Blagojevich's attorneys admitted for the first time Tuesday that he is guilty of corruption and accepts the verdicts against him, but said the sentence of 15 to 20 years prosecutors wanted was too harsh. The defense also presented heartfelt appeals from Blagojevich's family, including letters from his wife Patti and one of his two daughters that pleaded for mercy.

But the judge made it clear early in the hearing that he believed that Blagojevich had lied on the witness stand when he tried to explain his scheming for the Senate seat, and he did not believe defense suggestions that the former governor was duped by his advisers.

It is highly unlikely the 54-year-old will be taken immediately into custody. In white-collar cases, convicted felons are usually given at least a few weeks to report to prison while federal authorities select a suitable facility. Blagojevich is expected to appeal his conviction, but it is unlikely to affect when he reports to prison.

Going into the sentencing, many legal experts said the governor

who became a national punch line while doing several reality TV appearances while his legal case unfolded was likely to get around 10 years. A former Blagojevich fundraiser, Tony Rezko, recently was sentenced to 10 1/2 years, minus time served, and many were confident the governor would get more.

Prosecutors have said Blagojevich misused the power of his office "from the very moment he became governor." He was initially elected in 2002 on a platform of cleaning up Illinois politics in the midst of federal investigations that led to the prosecution and conviction of Ryan.

"Blagojevich engaged in extensive criminal conduct with and without Rezko, provided no cooperation, perjured himself for seven days on the witness stand, and has accepted no responsibility for his criminal conduct," prosecutors said. And they said Blagojevich, who campaigned as a reformer, was "acutely aware of the damage" Ryan had created.

Defense attorneys have said he has already paid a price in public ridicule and financial ruin, and propose a term of just a few years.

Blagojevich's sentencing came just days before his 55th birthday on Saturday, and nearly three years to the day of his arrest at dawn on Dec. 9, 2008, when the startled governor asked one federal agent, "Is this a joke?" In a state where corruption has been commonplace, images of Blagojevich being led away in handcuffs still came as a shock.

It took two trials for prosecutors to snare Blagojevich on sweeping corruption charges. His first ended deadlocked with jurors agreeing on just one of 24 counts that Blagojevich lied to the FBI. Jurors at his retrial convicted him on 17 of 20 counts, including bribery and attempted extortion.

FBI wiretap evidence proved decisive. In the most notorious recording, Blagojevich is heard crowing that his chance to name someone to Obama's seat was "f---ing golden" and he wouldn't let it go "for f---ing nothing."

Blagojevich clearly dreaded the idea of prison time. Asked in an interview before his retrial about whether he dwelled on that prospect, he answered: "No. I don't let myself go there."

In the same interview, Blagojevich also explained that the family dog Skittles was bought after his arrest in to help his school-age daughters, Amy and Annie, cope with the stress of his legal troubles. He said he joked with them that, "If the worst happens (and I go to prison), you can get another dog and call him `daddy."'

While Blagojevich will likely end up at a minimal security prison, he'll be largely cut off from the outside world. Visits by family are strictly limited, Blagojevich will have to share a cell with other inmates and he must work an eight-hour-a-day menial job

Most of the prisons where Blagojevich could end up are outside Illinois. One is in Terre Haute, Ind., where Ryan is serving his own sentence.