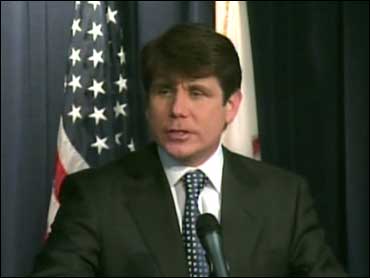 Blagojevich, who has been accused of corruption and charged with trying to effectively sell the Senate seat vacated by President Obama, said the state Senate rules don't allow him to call witnesses or effectively defend himself. He is boycotting the proceedings unless the rules are changed.

"I'm not getting a fair trial," he said. "They're just hanging me."

The governor said he would call witnesses such as White House Chief of Staff Rahm Emanuel, Rep. Jesse Jackson Jr., and Obama senior adviser Valerie Jarrett if given the opportunity. He has been impeached by the Illinois House but not the Senate.

(AP Photo/Seth Perlman)
Blagojevich said he was "eager" to defend himself and called on newspaper editorial boards – including the editorial board at the Chicago Tribune – to pressure the state Senate to change its rules, which prohibit testimony that federal prosecutors say could jeopardize their criminal case against the governor. Among the allegations against Blagojevich is that he sought the firing of a Tribune editorial writer.

The governor said this afternoon that he was being denied "the presumption of innocence." He compared his situation to that of a cowboy charged with stealing a horse in the old west who gets a sham trial before being hanged.

Here are part of Blagojevich's cowboy-related comments: "[Under state Senate rules] if the cowboy charged with stealing a horse was charged with doing that in town, but in fact on the date and time that he apparently stole the horse in town he was on the ranch with six other cowboys, herdin' cattle and ropin' steers, and then he expects that when his day comes to go to court he can bring those six cowboys to say it wasn't him 'cause he wasn't in town he was on the ranch herdin' cattle, even if he could bring those cowboys into say that, under these rules, under 8B, it wouldn't matter."

(AP Photo/M. Spencer Green)
Earlier today, the Associated Press reported that the governor compared the emotional strain on him and his family over the charges to the attack on Pearl Harbor.

"Dec. 9 to my family, to us, to me, is what Pearl Harbor Day was to the United States," he said. "It was a complete surprise, completely unexpected. And just like the United States prevailed in that, we'll prevail in this."

Chicago mayor Richard Daley for the second time referred to Blagojevich as "cuckoo" on Friday. The governor is reportedly considering asking the courts to stop the "sham" proceedings in the state Senate.

The press conference was the first step in a planned media blitz by Blagojevich, who is hoping to head off his removal from office. He claims that efforts to remove him are tied to his work to help the people of Illinois.

"Political figures in Illinois are just waiting to get me out of the way [so they can] raise the income tax," he said Friday. He added that the impeachment trial is "all about" his willingness to take on a failed system in order to help people.

Notes the AP: "The governor twisted facts or exaggerated them to support his version of events."