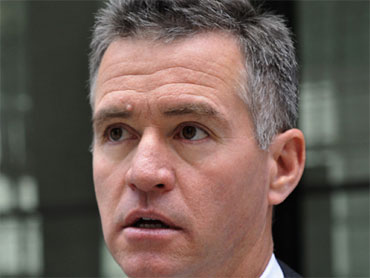 The birth of a conspiracy to profit from Rod Blagojevich's position came as early as 2003 when the then-governor met with three close advisers to discuss how to make money and divvy up the spoils, a key witness testified Wednesday.

In dramatic testimony at Blagojevich's corruption trial, his one-time chief of staff Alonzo Monk said the two of them, along with fundraisers Tony Rezko and Christopher Kelly, discussed various ways they could make money through state action.

Monk, who was Blagojevich's law school roommate and was by his side through most of his political career, said the group calculated that each of several schemes would raise $100,000 each and that the money would be divided up equally among the four.

But Monk said he and Blagojevich would get the money only after the governor left office.

"We didn't want to be receiving that money when Rod was in office, where there was potentially a lot of scrutiny ... (from) some law enforcement agency ... it could have been the media also," he said.

As for why he was so concerned, he said: "In all likelihood, it would be wrong and breaking the law."

Monk has pleaded guilty in the case and took the witness stand in the hopes of getting a lighter sentence. Much of his testimony so far were aimed at the racketeering portion of the charges against Blagojevich.

The former governor has pleaded not guilty to scheming to profit from his power to fill the U.S. Senate seat vacated by President Barack Obama and squeeze people for campaign contributions. If convicted, Blagojevich could receive up to 415 years in prison and fines totaling $6 million.

The group referred to themselves as "one, two, three, four," Monk said. He said the first person to talk to him about making money from state actions was Kelly, who was found dead last year in what police say was a suicide.

Monk was remarkably frank when asked why he took the idea of making money from the state seriously.

"I was intrigued by the topic and I wanted to make money," he said matter-of-factly.

One of several schemes they discussed but never implemented, Monk said, was to set up an insurance company that would draw thousands of dollars of state business - directed to it by the Blagojevich administration. according to Monk.

In his earlier testimony, Monk talked about how eager Blagojevich was to raise campaign funds, how Kelly and Rezko raised millions for him and how the governor rewarded them by showering them with patronage.

Sounding calm, almost monotone, Monk said Kelly and Rezko were in on deciding who got jobs in the Blagojevich administration, recommending heads of several key departments, including insurance, housing and transportation agencies.

When Rezko and Kelly asked him to do something, Monk said, he did "whatever they asked."

Monk portrayed Kelly as especially close to Blagojevich, even taking their families together on vacation, including to Mexico and Bermuda. Prosecutor Chris Niewoehner asked Monk if there was anyone closer to Blagojevich in his first term than Kelly.

"Other than Patti (Blagojevich's wife), and potentially me, no," Monk said.

Blagojevich and his wife watched Monk intently during his early testimony and the former governor took notes. Patti Blagojevich's sister Deb Mell, a state representative, sat next to her.

In his opening statement on Tuesday, defense attorney Sam Adam Jr. had portrayed Monk as someone who had dazzled and befriended Blagojevich as a younger man, then duped and betrayed him when he was governor.

The former governor's brother, Robert Blagojevich, 54, a Nashville, Tenn., businessman, has pleaded not guilty to taking part in the plot to sell the Senate seat and to scheming to illegally pressure a racetrack owner, who wanted the governor's signature on legislation involving the tracks, for campaign money.