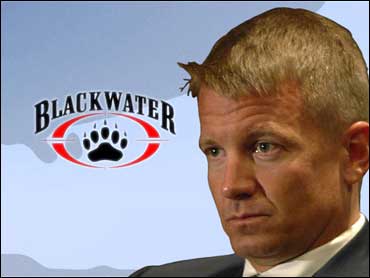 The founder of former Blackwater Worldwide Security firm, Erik Prince, was questioned Monday in connection with a civil lawsuit alleging the company repeatedly billed the U.S. government for excessive or inappropriate expenses.

Susan Burke, who represents two self-described whistle-blowers and former employees Brad and Melan Davis, said she questioned Prince for seven hours in a hotel in Abu Dhabi, where he moved earlier this month. She said the questioning related to the "facts underlying the complaint."

"Mr. Prince professed a lack of knowledge on a significant number of topics," Burke said without providing details of the deposition. "I will not comment on his testimony. I will leave that to a jury to decide whether his professions of a lack of knowledge are credible or not."

Prince did not speak with reporters.

The federal lawsuit filed in 2008 by Brad and Melan Davis claims Blackwater sought reimbursement for a prostitute for workers in Afghanistan and strippers in the aftermath of Hurricane Katrina. The lawsuit also claims Prince enjoyed substantial financial benefits from the alleged fraud. He founded Blackwater in 1997.

A federal law enforcement official told The Associated Press earlier this year that federal authorities in Virginia were investigating whether Blackwater had overbilled for its State Department work. The official spoke on condition of anonymity because he was not authorized to speak publicly.

Blackwater or its workers have also faced federal probes for shootings in Iraq and Afghanistan and accusations of arms smuggling.

An audit released last year found that the State Department could have been able to recover $55 million from Blackwater because the company didn't provide the personnel necessary to fulfill its contract during the months examined in 2006 and 2007.

Mark Corallo, a spokesman for the Moyock, N.C.-based company, which has since changed its name to Xe, said in February that the lawsuit is misguided and noted that the Justice Department declined to join the case.

Melan Davis, who said she handled some record-keeping and billing roles at Blackwater, said in a signed court statement that she found that a prostitute in Afghanistan had been placed on Blackwater's payroll under the "Morale Welfare Recreation" category.

Davis, who was fired from the company and is challenging her dismissal, said she also helped with record-keeping for Blackwater's response in Louisiana to Hurricane Katrina. Among other charges of excessive billing there, Davis said two workers paid a vendor for "cleaning services" but the vendor would instead provide strippers.

Brad Davis says in the court filing he witnessed three instances in 2005 in which company workers used excessive force in Iraq. He said the contractors involved in the shootings used unjustified force to "kill or seriously injure innocent Iraqi civilians," but that the company did not stop to see whether the targets of the shootings were alive or injured.