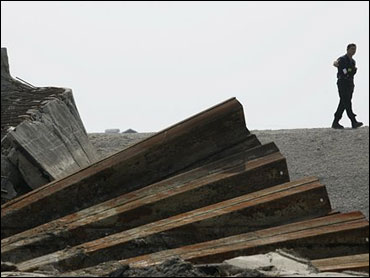 This column was written by Jeremy Scahill.

The men from Blackwater USA arrived in New Orleans right after Katrina hit. The company known for its private security work guarding senior U.S. diplomats in Iraq beat the federal government and most aid organizations to the scene in another devastated Gulf. About 150 heavily armed Blackwater troops dressed in full battle gear spread out into the chaos of New Orleans. Officially, the company boasted of its forces "join[ing] the hurricane relief effort." But its men on the ground told a different story.

Some patrolled the streets in SUVs with tinted windows and the Blackwater logo splashed on the back; others sped around the French Quarter in an unmarked car with no license plates. They congregated on the corner of St. James and Bourbon in front of a bar called 711, where Blackwater was establishing a makeshift headquarters. From the balcony above the bar, several Blackwater guys cleared out what had apparently been someone's apartment. They threw mattresses, clothes, shoes and other household items from the balcony to the street below. They draped an American flag from the balcony's railing. More than a dozen troops from the 82nd Airborne Division stood in formation on the street watching the action.

Armed men shuffled in and out of the building as a handful told stories of their past experiences in Iraq. "I worked the security detail of both Bremer and Negroponte," said one of the Blackwater guys, referring to the former head of the U.S. occupation, L. Paul Bremer, and former U.S. Ambassador to Iraq John Negroponte. Another complained, while talking on his cell phone, that he was getting only $350 a day plus his per diem. "When they told me New Orleans, I said, 'What country is that in?'" he said. He wore his company ID around his neck in a case with the phrase Operation Iraqi Freedom printed on it.

In an hourlong conversation I had with four Blackwater men, they characterized their work in New Orleans as "securing neighborhoods" and "confronting criminals." They all carried automatic assault weapons and had guns strapped to their legs. Their flak jackets were covered with pouches for extra ammunition.

When asked what authority they were operating under, one guy said, "We're on contract with the Department of Homeland Security." Then, pointing to one of his comrades, he said, "He was even deputized by the governor of the state of Louisiana. We can make arrests and use lethal force if we deem it necessary." The man then held up the gold Louisiana law enforcement badge he wore around his neck. Blackwater spokesperson Anne Duke also said the company has a letter from Louisiana officials authorizing its forces to carry loaded weapons.

"This vigilantism demonstrates the utter breakdown of the government," says Michael Ratner, president of the Center for Constitutional Rights. "These private security forces have behaved brutally, with impunity, in Iraq. To have them now on the streets of New Orleans is frightening and possibly illegal."

Blackwater is not alone. As business leaders and government officials talk openly of changing the demographics of what was one of the most culturally vibrant of America's cities, mercenaries from companies like DynCorp, Intercon, American Security Group, Blackhawk, Wackenhut and an Israeli company called Instinctive Shooting International (ISI) are fanning out to guard private businesses and homes, as well as government projects and institutions. Within two weeks of the hurricane, the number of private security companies registered in Louisiana jumped from 185 to 235. Some, like Blackwater, are under federal contract. Others have been hired by the wealthy elite, like F. Patrick Quinn III, who brought in private security to guard his $3 million private estate and his luxury hotels, which are under consideration for a lucrative federal contract to house FEMA workers.

A possibly deadly incident involving Quinn's hired guns underscores the dangers of private forces policing American streets. On his second night in New Orleans, Quinn's security chief, Michael Montgomery, who said he worked for an Alabama company called Bodyguard and Tactical Security (BATS), was with a heavily armed security detail en route to pick up one of Quinn's associates and escort him through the chaotic city. Montgomery told me they came under fire from "black gangbangers" on an overpass near the poor Ninth Ward neighborhood. "At the time, I was on the phone with my business partner," he recalls. "I dropped the phone and returned fire."

Montgomery says he and his men were armed with AR-15s and Glocks and that they unleashed a barrage of bullets in the general direction of the alleged shooters on the overpass. "After that, all I heard was moaning and screaming, and the shooting stopped. That was it. Enough said."

Then, Montgomery says, "the Army showed up, yelling at us and thinking we were the enemy. We explained to them that we were security. I told them what had happened and they didn't even care. They just left." Five minutes later, Montgomery says, Louisiana state troopers arrived on the scene, inquired about the incident and then asked him for directions on "how they could get out of the city." Montgomery says that no one ever asked him for any details of the incident and no report was ever made. "One thing about security," Montgomery says, "is that we all coordinate with each other — one family." That co-ordination doesn't include the offices of the Secretaries of State in Louisiana and Alabama, which have no record of a BATS company.

A few miles away from the French Quarter, another wealthy New Orleans businessman, James Reiss, who serves in Mayor Ray Nagin's administration as chairman of the city's Regional Transit Authority, brought in some heavy guns to guard the elite gated community of Audubon Place: Israeli mercenaries dressed in black and armed with M-16s. Two Israelis patrolling the gates outside Audubon told me they had served as professional soldiers in the Israeli military, and one boasted of having participated in the invasion of Lebanon. "We have been fighting the Palestinians all day, every day, our whole lives," one of them tells me. "Here in New Orleans, we are not guarding from terrorists." Then, tapping on his machine gun, he says, "Most Americans, when they see these things, that's enough to scare them."

Unlike ISI or BATS, Blackwater is operating under a federal contract to provide 164 armed guards for FEMA reconstruction projects in Louisiana. That contract was announced just days after Homeland Security Department spokesperson Russ Knocke told the Washington Post he knew of no federal plans to hire Blackwater or other private security firms. "We believe we've got the right mix of personnel in law enforcement for the federal government to meet the demands of public safety," he said. Before the contract was announced, the Blackwater men told me, they were already on contract with DHS and that they were sleeping in camps organized by the federal agency.

One might ask, given the enormous presence in New Orleans of National Guard, U.S. Army, U.S. Border Patrol, local police from around the country and practically every other government agency with badges, why private security companies are needed, particularly to guard federal projects. "It strikes me...that that may not be the best use of money," said Illinois Senator Barack Obama.

Blackwater's success in procuring federal contracts could well be explained by major-league contributions and family connections to the GOP. According to election records, Blackwater's CEO and co-founder, billionaire Erik Prince, has given tens of thousands to Republicans, including more than $80,000 to the Republican National Committee the month before Bush's victory in 2000. This past June, he gave $2,100 to Senator Rick Santorum's re-election campaign. He has also given to House majority leader Tom DeLay and a slew of other Republican candidates, including Bush/Cheney in 2004. As a young man, Prince interned with President George H.W. Bush, though he complained at the time that he "saw a lot of things I didn't agree with — homosexual groups being invited in, the budget agreement, the Clean Air Act, those kind of bills. I think the Administration has been indifferent to a lot of conservative concerns."

Prince, a staunch right-wing Christian, comes from a powerful Michigan Republican family, and his father, Edgar, was a close friend of former Republican presidential candidate and antichoice leader Gary Bauer. In 1988 the elder Prince helped Bauer start the Family Research Council. Erik Prince's sister, Betsy, once chaired the Michigan Republican Party and is married to Dick DeVos, whose father, billionaire Richard DeVos, is co-founder of the major Republican benefactor Amway. Dick DeVos is also a big-time contributor to the Republican Party and will likely be the GOP candidate for Michigan governor in 2006. Another Blackwater founder, president Gary Jackson, is also a major contributor to Republican campaigns.

After the killing of four Blackwater mercenaries in Falluja in March 2004, Erik Prince hired the Alexander Strategy Group, a PR firm with close ties to GOPers like DeLay. By mid-November the company was reporting 600 percent growth. In February 2005 the company hired Ambassador Cofer Black, former coordinator for counterterrorism at the State Department and former director of the CIA's Counterterrorism Center, as vice chairman. Just as the hurricane was hitting, Blackwater's parent company, the Prince Group, named Joseph Schmitz, who had just resigned as the Pentagon's Inspector General, as the group's chief operating officer and general counsel.

While juicing up the firm's political connections, Prince has been advocating greater use of private security in international operations, arguing at a symposium at the National Defense Industrial Association earlier this year that firms like his are more efficient than the military. In May Blackwater's Jackson testified before Congress in an effort to gain lucrative Homeland Security contracts to train 2,000 new Border Patrol agents, saying Blackwater understands "the value to the government of one-stop shopping." With President Bush using the Katrina disaster to try to repeal Posse Comitatus (the ban on using U.S. troops in domestic law enforcement) and Blackwater and other security firms clearly initiating a push to install their paramilitaries on U.S. soil, the war is coming home in yet another ominous way. As one Blackwater mercenary said, "This is a trend. You're going to see a lot more guys like us in these situations."

By Jeremy Scahill
Reprinted with permission from the The Nation