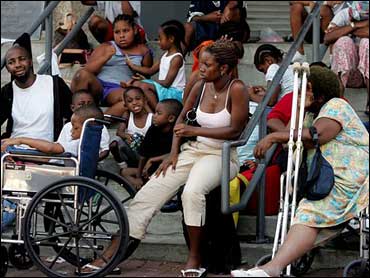 To African-Americans, Hurricane Katrina has become a generation-defining catastrophe — a disaster with a predominantly black toll, tinged with racism. They've rallied to the cause with an unprecedented outpouring of activism and generosity.

Blacks who have been touched by the disaster are not only donating money but gathering supplies, taking in friends and relatives, even heading south to help shoulder the burden of their people.

"You'd have to go back to slavery, or the burning of black towns, to find a comparable event that has affected black people this way," said Darnell M. Hunt, a sociologist and head of the African American studies department at UCLA.

If the rescue effort had not been so mishandled, and if those who suffered so needlessly had not been so black and so poor, perhaps Hurricane Katrina would have been just another destructive storm, alongside the likes of Charley and Andrew and Hugo. (There is no Keisha or Kwame.)

But Katrina's searing images — linking nature's wrath and the nation's wrongs — have fanned the smoldering resentments of the civil rights, Reaganomics and hip-hop eras all at once.

"Something about this is making people remember their own personal injustices," said author damali ayo, whose book "How to Rent a Negro" takes a satirical look at race relations.

"You don't look at Rodney King and say, 'I remember when I got beat up.' But people remember being neglected, unimportant, overlooked, thought of as 'less than.' That's a very common experience for black people."

Some 71 percent of blacks say the disaster shows that racial inequality remains a major problem in America, according to a survey by the Pew Research Center for the People & the Press, conducted Sept. 6-7 among 1,000 Americans; 56 percent of whites feel this was not a particularly important lesson.

And while 66 percent of blacks think the government's response would have been faster if most of the victims had been white, 77 percent of whites disagreed.

On Thursday, first lady Laura Bush said it was "disgusting" that critics blamed her husband's policies for the racial disparities between hurricane survivors. In an interview with American Urban Radio Networks, she said the homes of the poor were more vulnerable to the storm and "that's what we want to address."

Many events have transfixed African-Americans: the Rodney King and O.J. Simpson cases, the killings of icons from Martin Luther King Jr. to Tupac Shakur, the crack cocaine epidemic, the Clarence Thomas confirmation hearings.

But Katrina is different. It has opened people's eyes — "The face, the cover has been pulled off the invisible poor," said Rev. Ronald E. Braxton of Metropolitan African Methodist Episcopal Church in Washington, D.C. — and it has created a rare opportunity for people of all backgrounds to make a tangible, immediate difference.

Braxton spoke as his congregation loaded a 50-foot tractor-trailer with antacid, diapers, food, water and other supplies destined for AME churches in Jackson, Miss. and Baton Rouge, La.

Before Independence Air volunteered to fly the supplies to the hurricane zone, Braxton turned away volunteers willing to drive 22 hours to Baton Rouge. In addition, he said, his church raised $20,000 last Sunday alone to send to the national AME relief effort.

Individuals have also stepped up. Kimberly Lowe of Philadelphia signed up on that city's Web site to host an evacuee in a spare bedroom.

"They just probably want to talk to regular folks and be in a real home," Lowe said. "There's nothing like being home."

Katrina has spurred other blacks to take crucial roles in relief efforts — and they're in a better position to help than they were even a decade ago, when rap still scared people and being paid $30 million per year to play basketball was beyond imagination.

Now billionaire Mississippi native Oprah Winfrey is bringing her top-rated show to the Katrina zone, famed attorney Willie Gary is planning to transport victims in his 737 jet, and rapper Kanye West can excoriate President Bush's response to the hurricane in front of a nationwide audience.

Tavis Smiley has devoted much of his television talk show to Katrina.

"I've seen black folk come together around any number of issues. It's usually either a head or a heart issue," he said. "For example, we came together after the election of 2000, when Bush essentially stole the election. That was a head issue. People were mad. Other issues hit our hearts; O.J. Simpson comes to mind."

With Katrina, "our head is saying we know that what happened here is wrong ... and our hearts at the same time go out to these people because we know, we feel their pain."

Hip-hop hitmaker Timbaland said that he is renting trucks, buying clothes and toys and heading "to the trenches" — first stop, the Houston Astrodome. He challenged peers who splurge on jewelry and cars to do the same, because "these people in the dome listen to our music."

"Don't give to no Red Cross, that's the easy way. Not to say anything bad about the Red Cross, but who knows where that money's going," the producer said. "Take your money and do your own thing."

Timbaland estimated he was spending several hundred thousand dollars, up there with Diddy and Jay-Z's half-million each. The donation of time, money and free performances by hip-hoppers is a watershed for what had become a largely apolitical genre.

"This is the most devastating thing to their community they've seen in their lifetime," said the original hip-hop mogul, Russell Simmons. "I've never seen a bigger outpouring of love and giving. I've never seen anything like it."

There is another reason Katrina resonates. Most blacks have family from "down South," a sort of symbolic womb from which black America slowly went its separate ways.

"We are a population in this country of black people, but do we feel like a community?" said ayo, the author. "What really makes a community?"

"I think this is one," ayo said. Katrina "is at the central core of black culture and American culture ... I hope this is a turning point of some kind, a turning point for creating a larger community."