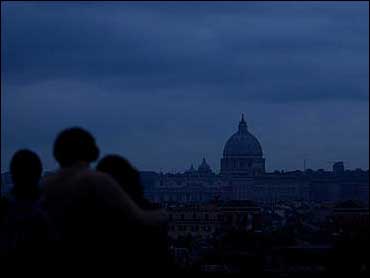 Power went out at the Vatican and across all of Italy Sunday in a paralyzing pre-dawn blackout.

The blackout stalled trains and knocked-out traffic lights from Milan to Sicily. It may have been triggered by a tree falling on power lines in Switzerland.

Thousands were trapped on trains, and the pope was forced to use a backup generator to proclaim his new cardinals. The outage underlined the fragility of Italy's reliance on imported power.

In Italy's worst power outage since World War II, most of the country's 58 million people were affected — more than in North America's biggest blackout, which left 50 million people without power in Canada and the United States on Aug. 14.

As in the North American blackout, there was initially confusion about the cause and finger-pointing among neighboring countries. With scant domestic supply and swelling public demand, Italy imports most of its electricity.

The blackout began at 3:25 a.m., hitting all of Italy except the island of Sardinia. The lights came back on in northern Italy by early morning and in most of Rome shortly after noon. But large swathes of southern Italy were still without electricity Sunday evening.

The outage tripped a burglar alarm at the home in Rome where Lonia Liscio, 21, was babysitting an 8-year-old boy. She woke up in a panic.

"The baby woke up too — he sleeps with the light on," she said. "He took out a flashlight and was up all night long. I was scared. I didn't know what was happening."

Tommaso Primavera, 17, was riding his motor scooter at the time in Rome.

"There was panic on the streets," he said. "The tourists went mad — everyone was thinking about themselves."

As experts tried to work out the cause, none of the three countries involved wanted all the blame. Swiss and French energy officials said the responsibility lay with Italy, while the Italians noted that the power cut came from France.

Initial investigations indicated a chain reaction that started in Switzerland and moved through France caused the outage.

In Switzerland, a falling tree branch disabled a power transmission line which caused another line to overload, disabling French transmission to Italy.

"After that, all connections to Italy dropped out," said Rolf Schmid, spokesman for the Swiss power company Atel.

Italian energy company Enel agreed with the Swiss assessment. But France's electricity grid operator RTE said it was too early to speculate about causes.

Whatever the cause, the blackout was an ordeal across Italy.

It brought to a halt some 110 trains with 30,000 passengers on board, and delayed numerous flights in addition to the few that had to be cancelled.

Hospitals were forced to rely on generators, which was crucial for one man undergoing a liver transplant in Turin. The blackout occurred during his six-hour overnight surgery, but emergency power helped doctors pull off the operation successfully, the ANSA news agency reported.

In Rome, the city was holding an all-night festival with museums, bars and shops still open at the time of the blackout. The result was many people, who had been encouraged to use public transport, found themselves stranded at subway stations.

The Vatican was also affected, with St. Peter's Basilica — normally lit up overnight — in darkness. When Pope John Paul II announced a slate of new cardinals from his window overlooking St. Peter's Square, the Vatican had to amplify his remarks with a backup generator, while journalists huddled with candles and flashlights in the Holy See press office.

The fact that the blackout happened in the slow-moving morning hours of a Sunday at least lessened the effect. The outages might not be over, however. Energy officials warned of the potential for cuts on Monday.

The Swiss power company accused Italy of a lack of coordination that aggravated the situation.

"Because of the high volume of exported power to Italy, it is vital that the network operators can be quickly coordinated and react correctly," Atel said in a statement.

Enel energy company spokesman Ralph Traviato said Italy imports up to 17 percent of its energy, compared with a European average of about 2 percent. He noted that Italy's own production is reduced overnight, meaning that any late-night problem from international suppliers has a magnified effect.

Some Italians have worried that new power plants could damage the environment — a position that has slowed new plant constructions. Also, national demand has shot up in recent years, prompting energy officials to warn of possible blackouts.

"I would like my fellow citizens to know that we must build new plants and networks on our territory or the situation will remain the same," Enel chief Scaroni said.

President Carlo Azeglio Ciampi urged that "we must not slow down the construction of new power plants."

Italy was hit with partial power cuts in June, when people — suffering in the scorching summer — overloaded the system with air conditioners and other electricity-guzzling appliances. That was the first time in more than 20 years that the national operator of the electrical grid ordered power cuts.

Last week, nearly 4 million people in eastern Denmark and southern Sweden were without electricity for more than three hours after a rare power outage plagued parts of Scandinavia.

On Aug. 28, power briefly went out in parts of London and southeast England, shutting off traffic lights in the British capital and stranding hundreds of thousands of people on subways and trains.

Authorities are still investigating the British outage, as well as the Aug. 14 blackout in Canada and the United States.