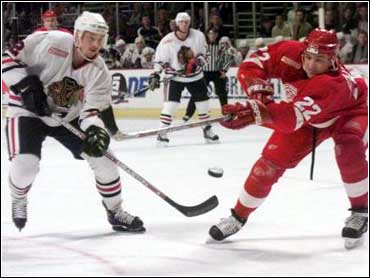 Alexei Zhamnov is back at full speed for the Chicago Blackhawks.

Zhamnov, playing his fifth game after missing eight because of a pulled hamstring, scored two goals in a 6:11 span in the third period as Chicago beat the Detroit Red Wings 6-4 on Sunday.

Zhamnov, who also had an assist, gave Chicago a 4-3 lead at 7:08, scoring off a rebound of Tony Amonte's shot. Zhamnov made it 5-3 with 6:41 left, bursting up the slot and beating goalie Ken Wregget on the short side.

"Right now, I'm feeling more comfortable," Zhamnov said. "I think we had a great effort in the third period and had a lot of jump. That's why we beat Detroit."

Detroit's Vyachselav Kozlov cut it to 5-4 with 6:04 remaining, but Michael Nylander added a power-play goal with 3:06 left as Chicago snapped a three-game losing streak.

"A lot of games we lack an edge, but today we had an edge," Amonte said. "Everyone was in the game. Detroit brings out the best in us."

Chicago, last in the Western Conference at 20-31-7, finished its season series against the Red Wings at 3-2-1.

Steve Yzerman had a goal and an assist for the Red Wings, who have lost two straight. Brendan Shanahan and Martin Lapointe also scored for Detroit, which outshot Chicago 38-2.

"We had our chances until the third," Detroit coach Scotty Bowman said. "We didn't play that badly, we just didn't put them away when we had the chances."

Detroit outshot Chicago 18-7 in the first period, but managed only a 1-1 tie. Daze opened the scoring for Chicago at 11:16, converted Steve Sullivan's feed. Yzerman tied it with 2:56 left in the period off a rebound.

The Blackhawks appeared to take a 2-1 lead with 1:50 remaining in the period when Bob Probert's centering pass was deflected in by Detroit's Mathieu Dandenault.

The goal was disallowed after video review because the back of the net wasn't flat on the ice. However, the replay showed Wregget had rocked the net with his glove.

The Red Wings took a 2-1 lead on Shanahan's power-play goal at 2:45 of the second period, but Amonte tied it 1:22 later on a rebound shot that caromed in off Wregget's stick.

Lapointe made it 3-2 at 6:22 of the second, flipping a shot over Jocelyn Thibault's shoulder from the slot. Marha tied it at 2:55 of the third with a 15-foot shot off a pass from Daze.