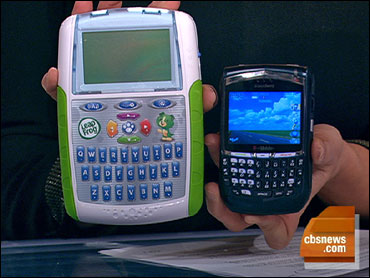 Soon, youngsters will be able to play with a toy that bears a striking resemblance to a device many adults can't put down -- a BlackBerry or, as hardcore users call them, a "CrackBerry"!

Text & Learn is bigger than the real thing, and will come complete with a keyboard and LCD screen.

But is it wise for kids to use such a toy? Or could it make them more prone to BlackBerry "addiction" later on?

"It does actually let kids engage in sort of a faux texting," Eis concedes, "so they can send and receive messages from Scout, the character featured in the product."

But, she adds, "It's not Web-connected, doesn't have interactivity. It's not letting kids communicate with each other."

On The Early Show Thursday, pediatrician Dr. Lisa Thornton said Text & Learn probably could prove useful -- up to a point.