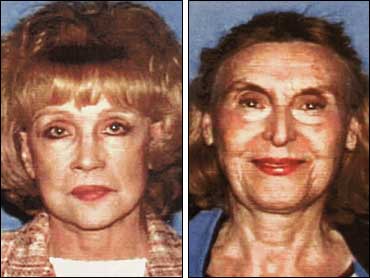 A Los Angeles jury has convicted a second elderly woman of murdering a homeless man in an insurance scheme.

The jury was deadlocked Thursday on another murder count and a conspiracy count against 75-year-old Olga Rutterschmidt.

She was convicted of murdering Kenneth McDavid. The judge has ordered the panel to reconvene Monday to try to decide the other two counts involving victim Paul Vados.

Rutterschmidt's co-defendant Helen Golay, 77, was found guilty Wednesday of the first-degree murders of Kenneth McDavid, 50, in 2005 and Paul Vados, 73, in 1999. The jury also convicted her of conspiracy to murder for financial gain counts in both killings.

From the start, the defendants' advanced ages kept the case in the headlines, drawing comparisons to the play and film "Arsenic and Old Lace," the Los Angeles Times reported. The killings came to be known as the Black Widow murders.

Prosecutors said the women collected $2.8 million from insurance policies on the lives of two homeless men who were killed in staged hit-and-run incidents.

Golay's convictions carry potential sentences of life in prison without possibility of parole. The single conspiracy count returned against Rutterschmidt carries a sentence of 25 years to life.

Jurors' struggles on some counts became evident Tuesday when they handed in some sealed verdicts and continued deliberating. On Wednesday, the panel asked for readings of testimony by three witnesses and a laptop to review DVDs entered in evidence.

The women showed no reaction to the verdicts. Golay sat with her head close to her attorney and read along as the court clerk went through the charges.

"Basically the ladies did not do very well today," Roger Jon Diamond, the attorney for Golay, said afterward.

But he said he was confident there were significant issues to raise on appeal of Golay's conviction.

Diamond said a key issue would be whether it was proper for the judge to admit a videotaped conversation between the women which was surreptitiously recorded by authorities while they were in a holding cell.

He said he felt the overall defense was harmed by the decision of Rutterschmidt's lawyer to attack Golay and suggest she was a killer.

Experts said the defendants made the prosecution's job easier by turning on each other, the Times reports. Attorneys for both women conceded in their closing arguments that McDavid was murdered, but each pinned the killing on the other.

Prosecutors said the women recruited their prey from among the homeless of Hollywood, invested thousands of dollars in insurance policies on them and in putting them up in apartments, then drugged them and ran them over in secluded alleys.

Both men initially appeared to have been victims of hit-and-run accidents, and police only linked the cases in late 2005 when a detective investigating one case overheard a colleague describe a very similar case.

In his closing argument, Deputy District Attorney Bobby Grace called the women "the worst of the worst."

"They didn't need this money. They weren't poor and destitute. They went out of their way to target men who had nothing," the prosecutor said.

Defense lawyers admitted the women were involved in insurance fraud but denied a murder conspiracy.

"We'll concede it's pretty sleazy what's going on here with the insurance," Diamond said in his closing. He said the idea was to insure old, sick homeless people who would die more quickly.

But prosecutors pointed out that most of the policies were for accidental death, not death due to natural causes.

By the end of the five-week trial, the women had turned on each other.