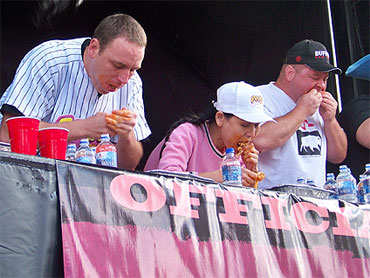 The Black Widow of eating contests gobbled up nearly 181 chicken wings in 12 minutes, devouring the national championship record in Buffalo on Sunday.

Buffalo, about 300 miles northwest of New York, is said to be the birthplace of the wings, typically fried and covered in tangy vinegar and hot sauce.

Chestnut, America's No. 1 professional eater, was favored to win Sunday's competition. He came in second after eating 169 chicken wings, or 4.55 pounds.

This was the first time Thomas, of Alexandria, Virginia, and Chestnut, of San Jose, California, faced off in a chicken wing eating contest. They went at it "neck and neck," said Drew Cerza, the founder of the festival, which was inspired by the 2001 Bill Murray comedy "Osmosis Jones," about a compulsive eater.

"They pushed each other really hard," Cerza said. "Joey is so strong. He's got great jaw strength. But Sonya's so fast with the hand."

Thomas, who's 5 feet tall and weights 105 pounds, calls herself the Black Widow because she often defeats bigger male competitors - Chestnut is 6-foot-2 and weighs 230 pounds - in eating contests. She set the previous wings record in 2005, when she ate 174 in 12 minutes.

The sprightly 43-year-old said she owed Sunday's triumph to her fancy finger work.

"Sometimes if I try to chew too much I slow down," she said. "I used my hands more than the mouth."

During the public contest, in front of thousands of people, she twirled the wings in her small fingers while quickly tearing off the meat with her teeth and lips.

Her cheeks were covered in a sheen of orange Buffalo sauce by the end.

But she said she was still hungry afterward, calling the wings "an appetizer." About an hour later, she made a guest appearance in the Ridiculously Hot Buffalo Wing Eating Contest and ate 20 more.