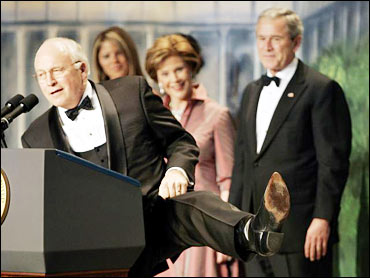 In a city brimming with pageantry under fortress-like security, country singer Neal McCoy, who has been entertaining U.S. troops with the USO, opened the Black Tie and Boots Ball with a rock 'n' roll song: "The Boys are Back in Town."

After he switched to country, the dance floor quickly filled with boot-clad ball-goers. "It's good to see people who know how to flow through here," McCoy said. "We travel all over the U.S. and I hate to see people halt when we play a two-steppin' song."

On the eve of his second inauguration, President Bush, Laura Bush and their daughters were the stars at Black Tie and Boots, while still finding time to drop by three candlelight dinners for major donors who contributed $100,000 and $250,000 to the inaugural.

Although it is not one of the official inaugural balls, demand for tickets to Black Tie and Boots prompted some to offer them at top dollar on eBay. The semi-required dress code was unusual: formal gowns and tuxedos with cowboy boots, hats and bolo ties.

An Oscar de la Renta gown and Laredo boots? Not a fashion faux pas for guests at the Black Tie and Boots Ball.

The Texas State Society's gala Wednesday is the first and arguably the most unconventional bash of inaugural week — at least in fashion terms.

It's the only party in town where guests are not just encouraged but expected to pair elegant chiffon couture from the racks of top designers like Lela Rose and Badgley Mischka with down-home duds like Stetson hats and Tony Lamas kicks.

Whether it's a giant silver belt buckle hanging from tuxedo trousers or a broken-in pair of cowboy boots peeking from under a sequined gown, anything seems to go — as long as it has a Lone Star State flair.

Four years ago at his first inauguration, the tuxedo-clad President Bush sported custom-made black leather and suede footwear embroidered with his initials and the presidential seal.

What's at the end of the rainbow? The White House — at least on the eve of President Bush's inauguration.

Fireworks fired Wednesday night from Lafayette Park, just north of the White House, marked an early evening celebration on Washington's Ellipse. Fireworks also were launched over the Washington and Jefferson memorials to the south.

A glowing rainbow appeared to hover over the Executive Mansion in a display apparently unaffected by the snow that blanketed the capital.

"Snow is easy, really, compared to rain, because it's not as wet," said Philip Butler, producer from the fireworks company, Grucci of New York. Grucci has years of experience doing shows in such snowy climes as Aspen, Colo., and Salt Lake City, he said.

Grucci also fired shells 300 feet into the air that each exploded into 'Ws' and spread over 100 feet in a tribute to the president's middle initial.

Inaugural shows are something of a specialty for Grucci. This is the seventh consecutive inaugural fireworks produced by the company, though not the largest. The party for President Clinton's first swearing-in featured 10 sets of fireworks fired from different points in the District of Columbia.

Charlie Brotman has hosted every presidential inaugural parade since 1957, and he still isn't sure how he got the job.

Brotman, 77, was a rookie public address announcer for the Washington Senators in 1956. With President Eisenhower in the stands for Opening Day, Brotman halted in mid-sentence when announcing that a pitcher named Truman Clevenger was entering the game.

"Now coming in for Washington, Truman," Brotman announced, stopping because he suddenly wasn't sure whether the player really was Clevenger.

"I looked down," Brotman recalled. "And there was Eisenhower in the presidential booth, and he turns around like, 'What is this, a big joke? Truman is coming in to pitch?"'

Harry Truman, of course, was Eisenhower's predecessor in the White House.

"I thought it was going to be my first and last game," Brotman said.

When he saw that it was indeed Clevenger, Brotman finished the sentence after a long delay — "Clevenger now pitching for Washington" — and then looked down to see Eisenhower nod approvingly.

"In December that same year I get a call: 'You must have impressed somebody, because I'm calling from the White House,"' Brotman said.

The call was to invite Brotman to announce the inaugural, and he hasn't missed one since. Thursday will be his 15th.

"The parade is indicative of the personality of the president," Brotman said. "When it was Eisenhower, he was a military man, and he just wants to get the thing over with — have some marching units and let's forget the whole thing. Kennedy and Reagan? Show biz! And so on and on."