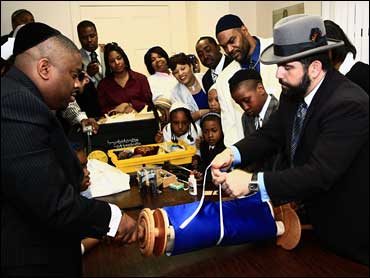 The jubilation in Temple Beth'El's packed sanctuary overflowed into the aisles, with members dancing, clapping and singing as they welcomed their first Torah from Israel.

A new sacred scroll - the holiest object in Judaism - is cause for celebration in any synagogue. But for this congregation, it meant much more. It signified a tentative step toward the mainstream of American Jewish life.

"We have been unable to sleep and to eat," said Debra Bowen, who is the rabbi. "We have Torah fever!"

Temple Beth'El is a predominantly African-American synagogue formed more than 50 years ago by the daughter of a Baptist preacher at a time when many blacks were rejecting Christianity as a slave religion. The same motivation led many African-Americans to move toward Islam.

The founder of Temple Beth'El, Louise Dailey, studied with a rabbi, but was not ordained by a recognized branch of Judaism. The synagogue has a kosher kitchen and a mikvah, or ritual bath, but Dailey also adopted some traditions that are alien to the ancient faith. Congregants called her "Mother Dailey," and she ordained Bowen, her daughter, before she died.

Yet, recently, Bowen has been reaching out to the broader Jewish community, holding joint services with other congregations and speaking to service groups such as Hadassah. Her timing is good. American Jews have been showing a new willingness to build ties to African-American Jews.

Rabbi Capers Funnye, cousin of first lady Michelle Obama, has just started receiving invitations to speak to white congregations. He is chief rabbi of Beth Shalom B'nai Zaken Ethiopian Hebrew Congregation in Chicago, one of the largest black synagogues in the country.

The San Francisco-based group Be'chol Lashon, which means "In Every Tongue," has been working to persuade Jews to break through the racial divisions that have alienated African-American, African and other ethnic minority Jews from the larger community.

Estimates of the number of American Jews and the makeup of the community vary. But Be'chol Lashon says that about 600,000 of the 6 million or so U.S. Jews identify themselves as nonwhite or from non-European countries.

The question of who can be considered a Jew is a subject of intense debate, since individual streams of Judaism have different ways of deciding the question under Jewish law. But in the case of most African-American Jews, the issue is even more complicated, since many did not follow any generally accepted religious law when they joined the faith.

"What makes somebody Jewish is not the congregation you belong to, but whether you were converted appropriately," said Jeffrey Gurock, a professor at Yeshiva University, an Orthodox school in New York.

Still, Bowen has had some success in her outreach. The fruit of her work could be seen at the recent Sunday service dedicating the Torah. Funnye read a prayer at the event. In the audience was Gloria Gelman, a white Jew from the liberal Reform branch, who had heard Bowen's presentation to Hadassah. She is encouraging the synagogue to start its own Hadassah group.

Dan Ross, a 21-year-old University of Pennsylvania student, is a white Jew who is writing his senior thesis on Beth'El and has brought many other Jewish students to visit. At the Torah commemoration, he said, "It really hits you how significant it is that they have it."

Lewis Gordon, director of Temple University's Center for Afro-Jewish studies, has also been a frequent visitor at other services. "These are people who are proud of being African-American and are absolutely proud of being Jews," Gordon said.

The ceremony was a mix of Hebrew readings and shouts of "Hallelujah!" - a worship style typical of African-American churches. The booming music came from what Christians would call a "praise band" - with electric guitars, drums and keyboard. There was a dress code - another unusual tradition for Jews - of blue, silver or white clothing. Bowen's garb was far from typical for a rabbi. She wore an elaborate, flowing white gown - like a wedding dress - with matching white shawl and a yarmulke.

The Torah was acquired by Rabbi Rigoberto Emmanuel "Manny" Vinas, who leads a Spanish-Jewish synagogue in Yonkers, N.Y. Vinas noted that many suppliers had been reluctant to sell a Torah to Temple Beth'El because of its history, and he expected strictly traditional Jews would criticize him for brokering the purchase.

"I saw the service that was held for the Torah," Vinas said. "You see those people crying and so deeply moved ... . That's a congregation that's going to honor and uphold the Torah."

The synagogue in the city's West Oak Lane neighborhood grew from a prayer group in the living room of Dailey's North Philadelphia home. She was working as a maid in a Jewish home and felt drawn to their religious rituals, such as not working on the Sabbath and covering mirrors during mourning. When she died in 2001, she had a Jewish funeral and was buried in a Jewish cemetery.

Bowen, 63, said the synagogue had lived "quietly" for decades in order to worship without distraction, scrutiny and questions of whether the congregation was truly Jewish.

But now she said, "doors are opening."

"The greater Jewish community," she said, "has been amazingly welcoming."