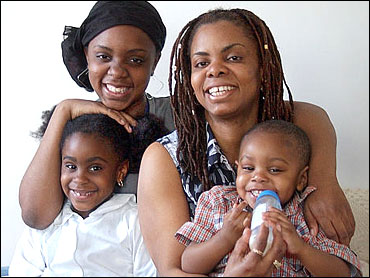 When Vonnessa Goode gives birth in a few weeks, one of her first decisions could be among the toughest: whether to give her daughter a distinctively black name.

On the one hand, Goode and the child's father don't want their daughter "robbed of her ethnicity," she said. On the other, she believes a distinctively black name could end up being an economic impediment.

"I do believe now when a resume comes across an employer's desk they could be easily discriminated against because they know that person is of African-America descent," she said. "It's a difficult decision."

Minorities of all kinds have wrestled with whether to celebrate their culture by giving their children distinctive names, or help them "blend in" with a name that won't stick out. Thousands of Jews have changed their names, hoping to improve their economic prospects in the face of discrimination, as have Asians and other minorities.

Blacks, however, have chosen increasingly distinctive names over the past century, with the trend accelerating during the 1960s.

Researchers who have looked at Census records have found that 100 years ago, the 20 most popular names were largely the same for blacks and whites; now only a handful are among the most popular with both groups. Names like DeShawn and Shanice are almost exclusively black, while whites, whose names have also become increasingly distinctive, favored names like Cody and Caitlin.

Two recent papers from the Cambridge-based National Bureau of Economic Research draw somewhat different conclusions about whether a black name is a burden. One, an analysis of the 16 million births in California between 1960 and 2000, claims it has no significant effect on how someone's life turns out.

If nothing else, the first paper, by the NBER's Roland Fryer and the University of Chicago's Steven Levitt, based on California birth data, provides probably the most detailed snapshot yet of distinctive naming practices. It shows, for instance, that in recent years, more than 40 percent of black girls were given names that weren't given to even one of the more than 100,000 white girls born in the state the same year.

The paper says black names are associated with lower socioeconomic status, but the authors don't believe it's the names that create an economic burden.

Using Social Security numbers, they track the changes in circumstances of women born in the early 1970s who then show up in the data in 1980s and '90s as mothers themselves. The data also show whether those second-generation mothers have health insurance and in which Zip Codes they reside - admittedly imperfect measurements of economic achievement.

The data do appear to show that a poor woman's daughter is more likely to be poor when she gives birth herself - but no more so because she has a distinctively black name.

To Fryer, that suggests black parents shouldn't be afraid to choose ethnic names. It also, he says, suggests more broadly that for blacks to improve economically, they don't have to change their culture, but should push for greater integration in society.

"It's not really that you're named Kayesha that matters, it's that you live in a community where you're likely to get that name that matters," Fryer said.

The University of Chicago's Marianne Bertrand and MIT's Sendhil Mullainathan, however, appeared to find that a black-sounding name can be an impediment, in another recent NBER paper entitled "Are Emily and Greg More Employable Than Lakisha and Jamal?"

The authors took the content of 500 real resumes off online job boards and then evaluated them, as objectively as possible, for quality, using such factors as education and experience. Then they replaced the names with made-up names picked to "sound white" or "sound black" and responded to 1,300 job ads in The Boston Globe and Chicago Tribune last year.

Previous studies have examined how employers responded to similarly qualified applicants they meet in person, but this experiment attempted to isolate the response to the name itself.

White names got about one callback per 10 resumes; black names got one per 15. Carries and Kristens had call-back rates of more than 13 percent, but Aisha, Keisha and Tamika got 2.2 percent, 3.8 percent and 5.4 percent, respectively. And having a higher quality resume, featuring more skills and experience, made a white-sounding name 30 percent more likely to elicit a callback, but only 9 percent more likely for black-sounding names.

Even employers who specified "equal opportunity employer" showed bias, leading Mullainathan to suggest companies serious about diversity must take steps to confront even unconscious biases - for instance, by not looking at names when first evaluating a resume.

Both studies have their shortcomings; the California records give only broad indicators of economic achievement, and studying whose resumes elicit callbacks doesn't show who ultimately gets the jobs or what they do once employed.

But both also point to dilemmas for advocates of greater economic opportunity for blacks. Some, like Fryer, are eager to show black culture isn't a handicap, and black parents shouldn't shy away from it. On the other hand, Bertrand and Mullainathan's work suggests a black name could still conceivably hold someone back. The question is whether a distinctive name is a cause or consequence of black isolation.

Where is Goode leaning? She says her daughter will likely end up with a "neutral" name, Naomi or Layla perhaps, that won't signal her race either way.

Michelle Botus, a 37-year-old student at Bunker Hill Community College who has named her four children Asia, Alaysia, Khalima and Denzil, said she would advise mothers to choose names they like, then make sure their children get the education they need to rise above any discrimination they face.

"The fact you didn't give the child the name you wanted, your regrets could be manifested in other ways later on," said Botus. "I would say go for it. Just the fact that the mother would have the insight to have a dilemma, that means she's thinking, and that's one of the most important skills in parenting."

Self-defense or murder? Shooting death divides a community
Thanks for reading CBS NEWS.
Create your free account or log in
for more features.
View CBS News In
CBS News App Open
Chrome Safari Continue
Be the first to know
Get browser notifications for breaking news, live events, and exclusive reporting.