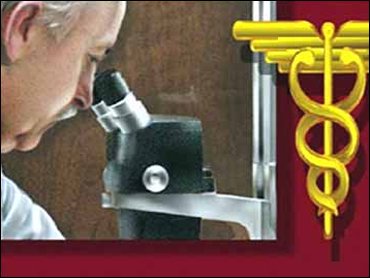 For seven years, Alda Brunson tried to figure out why her daughter, Iris, was having severe allergic reactions inside their Houston-area home.

"She had a lot of strange problems --fungus, rash on her body that we couldn't get rid of," says Brunson. "Often times, in the middle of the night, she would wake up and her throat was swelling, her face was swelling, and she couldn't breathe."

Doctors were also stumped, until Brunson learned of a toxic mold called stachybotrys, which scientists have linked to everything from nosebleeds to headaches to anaphylactic shock, reports CBS News Correspondent Russ Mitchell.

"My daughter's room," says Brunson, "was full of mold."

Stachybotrys (or black mold) is showing up across the country - in homes, schools, courthouses, banks and even government buildings. And it's not just happening in the humid south. Molds only need a moist surface to grow.

Brunson's mold problem began when the synthetic stucco used on the outside of her home, allowed water to seep in, trapping it in the walls. Other homes in her development have the same problem.

Getting rid of mold can be expensive, often costing as much as the home itself. Besides replacing walls, flooring and furniture, some homes may even have to be stripped right down to the frame. Most insurance companies pay for mold damage as long as it results from a problem already covered under the homeowner's policy (such as a broken pipe or leaking roof). But because of the overwhelming number of claims, some companies appear to be looking for loopholes to avoid paying up.

Brunson's insurer denied her claim, saying the mold grew out of the stucco problem, which is considered a builder's defect. Unable to sell their homes, Brunson and the other families in her development filed suit against the builder, Life Forms, Inc., and Finestone, the manufacturer of the synthetic stucco.

The builder has offered to patch the leaks and has a lawsuit of its own against the stucco manufacturer. Says Bruce Cohoon, president of Life Forms, Inc.: "We feel that they're the responsible party here and the applicator of the product and anything we're doing to assist our customers in the remedy of this situation should be borne by them."

Finestone maintains that the synthetic stucco is an effective product if properly applied.

Alda Brunson's home sits empty. Its value plummeted from $250,000 to just $1,000. As she waits to go to trial, she contnues paying the mortgage on what is essentially a worthless home.

For more information about black mold, go to the Centers for Disease Control or the California Department of Health Services.