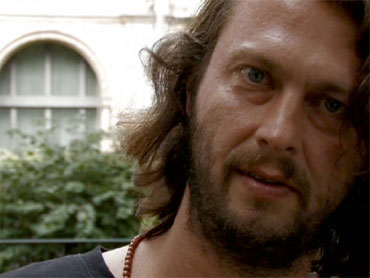 (AP PHOTO)
Photo: Nick Rosen in an interview with The Associated Press in Cologne, Germany.

NEW YORK (AP) In 2005, a rebellious and sporadically employed Israeli man flew to New York to give up a kidney to save an American businessman. For that, he says he was paid $20,000, which appeared in a brown envelope on his hospital bed after the operation.

That payoff would be illegal.

But the kidney donor, 39-year-old Nick Rosen of Tel Aviv, says that doesn't matter. "I smoke pot. That's also against the law."

Rosen believes he did a good deed and that organ donors like him should be compensated. Much of his story can be confirmed, and the case gives new resonance to claims that a black market for kidneys has thrived even in the United States.

Rosen made a video about his transplant experience, and near the end of it, he is seen reclining on a bed piled with cash. A subtitle says: "This is what $20,000 looks like." It's hard to tell the amount, but the $100 face of Ben Franklin is visible on the bills.

His tale of organ trafficking might be incredible if he had not made the video, and if the issue of black market organs had not burst into public view with the recent arrest of a New Yorker accused of brokering a kidney sale. Rosen does not know that man, who as far as he knows, had nothing to do with his own transaction.

For years, kidneys have been available on a thriving international black market, but evidence of organ trafficking in the United States is harder to find. However, doctors and others in the transplant field have long suspected an illegal organ market exists here.

Nick Rosen's story, which he says began when he answered a "Kidney Donor Wanted" ad in an Israeli newspaper, may open a window into that world.

5192102Last year, 4,540 Americans died while on transplant lists, waiting for kidneys. The man who got Rosen's kidney says he almost died, too.

"I was on death's doorstep," says Brad Gursky, a 51-year-old balding, beefy man whose left arm vein is thick and hardened from years of intravenous dialysis treatments.

Gursky confirms much of Rosen's story, except for the $20,000 payment. "It's an embellishment," he said in an interview on his front porch in Woodbury, a suburb on Long Island.

Is he happy Rosen made a video that essentially accuses him of participating in illegal organ trafficking?

"I have to give the man a pass on the video. He saved my life, and he did a mitzvah," a good deed.

A month before he got Rosen's kidney, Gursky was in end-stage renal failure and had just endured a huge disappointment: One week before Father's Day 2005, this father of three got the happy news that Mount Sinai Medical Center had a kidney for him, a perfect match. He and his whole family went to the hospital. But 24 hours later, all joy was snatched away. A mistake had been made by the donor network, and the kidney was going to someone else.

"Any hope he had of a healthy life was crushed," reads a letter of complaint written by Gursky's wife, Gwen, to the New York Organ Donor Network. A reply from the national organ donation network acknowledges the "unfortunate situation" and mentions "corrective actions."

A month later, in Rosen's video, Gursky is smiling and happy. His hope of a healthy life had been restored by a stranger, Nick Rosen, who Gursky says he found through "a friend of a friend." 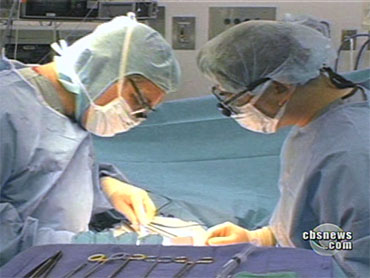 (CBS)
Nick Rosen's disjointed, fuzzy video of his transplant experience has been viewable online for several months, if you know where to look. The Associated Press tracked him down through Facebook, the social networking site where Rosen lists his religious views as "jubu," slang for Jewish with an interest in Buddhism. He has 225 friends, including Brad Gursky.

Rosen says he was born in New York, and his family moved to Israel when he was a toddler. In adulthood, he became friends with a playwright who needed a kidney and was writing a play about dialysis. He says he translated the play for her into English and offered to donate his kidney, but she refused.

Rosen was nearing his 35th birthday. So when he saw an ad in an Israeli newspaper seeking a kidney donor, it seemed an appropriate gesture. "I wanted to make a difference." He says he called a phone number and was told he would be paid the equivalent of $20,000 for his kidney.

A man who called himself Moti, "an ugly guy" whom Rosen believed to be in charge of brokering the sale, sent him for medical tests in Israel.

"I told him I want to film my story because I'm a video producer-director, and I think this has value," Rosen says. Moti refused "so I don't have him on film."

Rosen says his U.S. passport and universal-donor Type O blood made him an appealing match to the kidney broker.

After months of medical tests in Tel Aviv, Rosen videotaped a meal with his family a few days before his trip to New York for surgery. His father scolds him loudly, shouting, according to subtitles, "You should stand on your own two feet and not ask others to support you! I told you, don't film me about this thing or else."

Ellen Simich, now of New York, was a friend of Rosen's in Israel at the time. She says she knew him to be "extremely intelligent, very open, very resourceful, very creative, a free spirit."

She knew he intended to sell his kidney and "no matter how noble his idea ... it was a huge illegal kind of business behind this thing."

At first, she tried to talk him out of it, she says, but eventually she accepted that he was not going to change his mind.

"I was very concerned about his safety," she says. She happened to be visiting a friend in New York when Rosen arrived for the transplant. She made Rosen promise to call her after he met with his connection, an escort he knew only as Arik who took him for more medical tests. Arik is shown in the video.

Rosen says he met Brad Gursky for the first time a few weeks later in an outdoor parking lot in Queens. 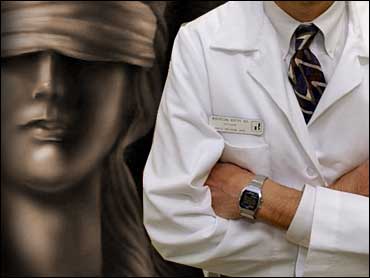 (CBS/AP)
The transplant was done at Mount Sinai Medical Center, and some of its doctors appear on Rosen's video. One doctor says, "There are a lot of very important kind of life-or-death issues that we need to discuss." The doctor pauses. "And honestly I don't think we can have a really ..."

The doctor gestures with his hand until Rosen says, "You want me to put this down?" The camera goes off.

Mount Sinai officials refuse to discuss the case and details of their kidney donor screening process. Dr. Daniel Herron, a surgeon who appears to be on Rosen's video, said he was aware of the video but that he could not talk without checking with the Mount Sinai press office. The next day, the press office said Herron was away and not available for an interview.

Hospital spokeswoman Brenda Perez issued a statement describing Mount Sinai's transplant screening process as "rigorous and comprehensive." The process "assesses each donor's motivation," the statement says, and all donors are "clearly advised" that it's illegal to receive money or gifts for being an organ donor.

"The pretransplant evaluation may not detect premeditated and skillful attempts to subvert and defraud the evaluation process," the statement concludes.

On its Web site, Mount Sinai says people may not donate a kidney if they were solicited by advertising or if they have a financial incentive.

Transplant centers in the United States are mostly free to devise their own rules for screening donors to make sure they are not selling organs. Experts suggest that some hospitals do little to block black-market kidneys because transplant procedures bring in so much money.

Apart from detecting black-market organ transactions, donor screening is intended to make sure the donor understands the implications of the surgery, and is not being coerced by social pressure or other means.

Rosen says he and "the recipient" (he rarely mentions Gursky by name) made up a story to convince Mount Sinai doctors they were cousins and that no money was changing hands. Rosen says the screening process at Mount Sinai "seemed OK," and he has no way of knowing whether the hospital or doctors suspected anything was amiss.

Rosen told his story in interviews with The Associated Press by phone, through messages on Facebook, and in a television interview in a park in Cologne, Germany, where he was traveling.

He says his video makes the case that organ donors should be "compensated," the word he prefers over "paid." Some doctors and kidney patients believe a legal system for compensating living donors should be created. They believe better incentives for donors could increase the supply of organs and save lives.

Rosen says he counts himself among those advocates and derides opponents as moralists who offer no alternative for kidney patients and potential donors like him who want to help but cannot afford to do so without payment.

"This is months of tests and recuperation. And you can't work, and it makes a lot of sense to compensate," Rosen says.

In addition to the agreed-upon price, Rosen says, he asked for and got another $1,000 for a friend he stayed with in New York while having tests and the surgery. Questioned by the AP, the friend denied getting any money. Rosen refuses to say who paid him but says the cash was left in a brown manila envelope on his hospital bed.

In the video, Rosen and Gursky are together more than once: at a coffee shop where Rosen gives him a small book of Psalms and posing for a snapshot together at a restaurant, a celebration after the transplant.

Gursky says he is grateful. "Nick is an awesome guy," he says. "He saved my life."

Rosen says he spent the last of the $20,000 a year or two ago and has no regrets. "I thought what I was doing was right."