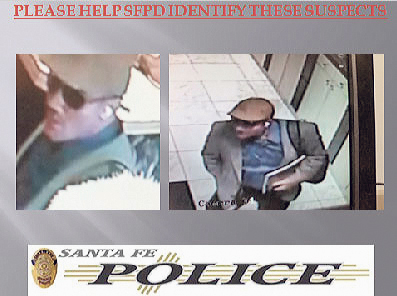 Outdoors, holiday revelers gathered for caroling, hot chocolate and a first glimpse at holiday lights on the day after Thanksgiving. Inside the Diva Diamonds & Jewels storefront, police say thieving hands reached into an unlocked glass jewelry case while staff were too busy attending to customers to notice.

Surveillance video is providing clues about a trio of suspects linked to the crime, Santa Fe Police Lt. Michele Williams said. Eleven items worth more than a $1 million were taken from the store.

"We had the Christmas tree lighting, we had Black Friday shopping," Williams said. "There were crowds all around. Whether they planned it on that day or not, it certainly worked out well for them."

Investigators have honed in on video footage from both the day of the theft and nearly three weeks earlier, when possible conspirators were seen snooping around the jewelry store.

Police declined a request to release the surveillance video, but they have distributed still images from the video of three suspects in hopes of identifying the individuals.

Williams said releasing the complete videos could interfere with the investigation.

Santa Fe's downtown plaza is ringed by museums, art galleries and restaurants. The public square dates back to the 1600s and remains a popular venue for performances and seasonal markets.

The jewelry store could not be reached by phone or email. It advertises diamonds, gems, and fine jewelry in a wide range of styles. Police declined to describe the stolen items.

A glass display case was kept unlocked during business hours. Police said the jewelry was removed between 5:15 p.m. and 5:30 p.m. Jewelry store employees discovered the items were missing about 6 p.m.