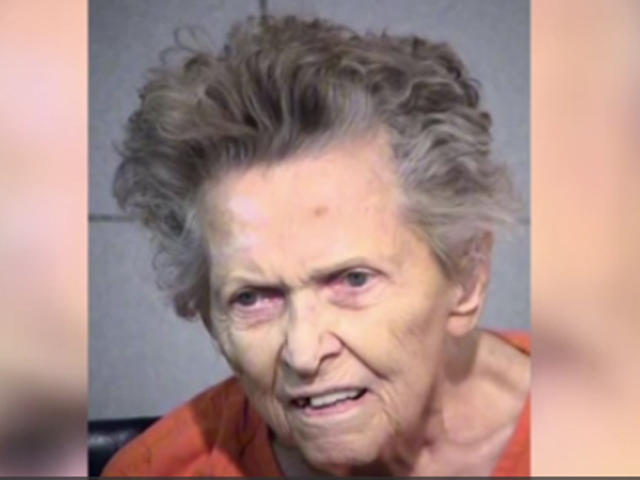 FOUNTAIN HILLS, Ariz. -- A 92-year-old woman shot and killed her 72-year-old son because he wanted to put her in an assisted living facility, according to the Maricopa County Sheriff's Office. In what MCSO described as a "bizarre turn of events," Anna Mae Blessing is facing one charge each of first-degree murder, aggravated assault with a deadly weapon and kidnapping, reports CBS Phoenix affiliate KPHO-TV.

Deputies were called out to Fountain Hills about 10 a.m. Monday.

Blessing had been living with her son, Thomas Blessing, and his girlfriend in the girlfriend's condo.  They moved her in about six months ago from out of state.

"According to statements provided by suspect Blessing and received by the detectives, she had been contemplating for several days her son's intentions to place her in an assisted living facility," explained a news release from MCSO. "Blessing retrieved two pistols and concealed them in the pockets of her robe, then confronted her son in his bedroom."

MCSO said she shot her son twice before turning the gun on his 57-year-old girlfriend.

While struggling with that woman, whose name has not been released, Blessing lost her grip on the gun. But she still had the second one.

"Blessing retrieved the second handgun and attempted to point it at the girlfriend, who knocked it from Blessing's possession," according to MCSO.

The girlfriend called 911. When deputies arrived, they ordered Blessing to come outside but were met with silence. They found her sitting in her reclining chair, her son deceased in a bedroom.

"As the suspect was being escorted from the residence, she made a spontaneous statement to the effect of 'You took my life, so I'm taking yours,"' court documents read."

It was later determined during an interview with the suspect that she believed her life was being taken as a result of her son and his girlfriend attempting to place her into an assisted living facility, police said.

According to the probable cause for arrest statement, Blessing "intended to kill herself, however she didn't possess any additional firearms."

In speaking with Blessing, investigators learned that she had owned the two guns -- a revolver and a .25 caliber pistol -- since the 1970s. The first, she said, she bought at a gun store; the second was given to her by her husband before he died. She also told deputies the last time she fired either of the weapons was in the '70s.

The suspect stated she stored the two handguns on the floor under a shelf in her bedroom.

When Blessing was asked what she thinks should happen to her, she replied she should be "put to sleep" as a result of her actions.

"This is definitely an odd one," MCSO Sgt. Bryant Vanegas told Arizona's Family. "There's a lot of circumstances surrounding it, of course, but it's definitely something you don't see every day and it's very unfortunate that this took place."

"It is always concerning when domestic issues escalate to violence or tragic outcomes," Sheriff Paul Penzone said in a statement. "They are often isolated and neither predictable nor preventable."

According to court documents, there was a history of domestic violence between Blessing and Thomas, including at least one incident in which police responded.