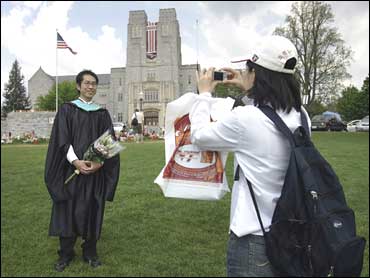 Some families of the 32 shooting victims couldn't bear to attend Virginia Tech's graduation Friday. Others said they had no choice but to come.

"We have to. This is right for us," said Peter Read, whose freshman daughter Mary Karen Read was among those killed in the April 16 attack by student Seung-Hui Cho.

It was a day of contrasts — somber at one moment, celebratory the next, reports CBS News correspondent Sharyn Alfonsi.

"You feel like a split personality," said Lisa Borel, whose daughter, Paige, graduated that day. "Half of your heart is so excited, so full of joy, and half your heart is with the families of the kids who didn't make it, and you just carry that with you all the time."

The school planned to issue class rings to Peter Read and relatives of the other 26 student victims on Friday night, then diplomas in smaller ceremonies Saturday. Five faculty members were also slain before Cho killed himself.

Cho's family will not receive a ring or diploma.

Read had traveled from Annandale with 15 family members for the ceremony, which he said "recognizes what all of the students were here to do. It validates their choices, and it validates what they were doing."

Workers in bright yellow shirts checked bags outside Cassell Coliseum, where nearly 1,200 graduate students were receiving their degrees in the first of several ceremonies. State troopers were posted at every entrance, but guests did not have to pass through metal detectors.

"I would have never thought that I would have to deliver such a speech, and in my worst dream, I would never have wanted to," he told reporters at a news conference. "I have kids, one of whom is in college now ... and when I think of what happened here, it saddens me like it saddens parents everywhere."

But celebrating the graduates' achievements was also appropriate, Abizaid said.

"They have spent a good four years here working hard," he said. "They deserve their opportunity to both celebrate and also be compassionate about those who lost their lives so tragically."

In Washington, D.C., President Bush issued a statement praising "the compassion and resilient spirit" of the Virginia Tech community and the 3,600 graduating seniors and others earning advanced or associate degrees.

"Laura and I salute the Virginia Tech Class of 2007. We also remember the students and teachers whose lives were taken last month," he said. "They will always hold a special place in the hearts of this graduating class and an entire nation."

Twins Andrea and Michelle Falletti of Chantilly, Va., said they will not let the shootings overshadow their college memories of spring breaks, camping trips and partying with friends.

Their parents and grandparents will be in the audience, and it will, in many ways, still be the graduation they've long envisioned.

"Obviously, what has happened has affected everything in our lives, and it will affect graduation," said Andrea Falletti, 21. "In a way, it's not going to be celebrating us as much; it's more about what we've done as a community. But that's OK. I'm proud of what we've done here."

Richard Roopan, a business information technology major who posed for photos Thursday in his cap and gown outside Torgersen Hall, said the atmosphere on campus was "a little bit more somber than celebratory."

After nearly four weeks of mourning, Roopan said he hopes there will be some joy.

"But you have to remember them, also, and what they could have done and their achievements and how, you know, this moment that we have right now has been taken away from them," he said.

Peter and Cathy Read said they returned to campus for more than their daughter's degree. They returned, in part, to erase an unsettling image from the minds of their two youngest sons, ages 4 and 2.

"They're a little concerned that the bad man's going to shoot them," Cathy Read said. "We can't let that idea grow in their heads."