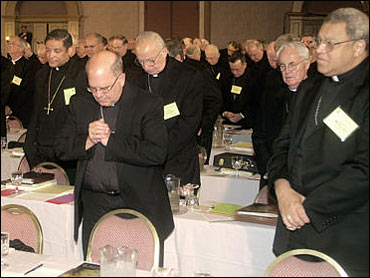 After days of outside criticism of their commitment to ridding the church of sexual abusers, the nation's Roman Catholic bishops insist their reform plan remains on track.

And they got a strategic boost from prominent Washington, D.C. attorney Robert Bennett, a member of the National Review Board, a lay monitoring panel whose chairman quit in disgust Monday.

Following a closed-door session Thursday, Bennett said "the overwhelming number" of U.S. bishops fully support the board's efforts. The meeting involved all bishops, three review board members and staffers conducting a review board investigation of the extent of past abuse.

"If we don't get cooperation, we'll name names," Bennett added.

With tensions seemingly resolved, the bishops are holding more private sessions all day Friday on whether to call an extraordinary national meeting, known as a "plenary council," to address the American church's problems.

It would be the first such event since 1884.

The bishops' only public event scheduled for Friday is a midday news conference with Archbishop Michael Sheehan, temporary leader of the Phoenix, Ariz., diocese, where Bishop Thomas O'Brien resigned after a felony arrest over a hit-and-run accident in which a man died.

On Friday night, Survivors Network of those Abused by Priests, a group of abuse victims that is skeptical of bishops' performance, begins its first national assembly at a nearby hotel.

The flashpoint in recent weeks has been the board's survey of the extent of abuse cases, which is being conducted by the John Jay College of Criminal Justice. Refusal by California's bishops to file questionnaires caused a flareup between Cardinal Roger Mahony and review board chairman Frank Keating and, in part, Keating's Monday resignation.

But lawyers for the California bishops and John Jay staffers worked out a compromise, announced Thursday.

The solution, he said, was providing information "in indecipherable code" to John Jay without changing the questionnaire itself.

Kathleen McChesney, director of the Office of Child and Youth Protection on the bishops' staff, said she and the review board believe "the issues raised thus far have been sufficiently addressed and everyone is moving forward."

Once the questionnaires are filed, the next big project is an audit of all 195 dioceses by McChesney's office on whether they are complying with reform measures the national hierarchy approved a year ago.

Archbishop John Myers of Newark, N.J., who had been critical of McChesney, said those differences have been resolved. He was irritated over McChesney's comments on statutes of limitations in filing abuse cases because state laws vary, and the fact that McChensey spoke to a New Jersey chapter of the lay group Voice of the Faithful.

But Thursday he had no criticisms to make, and said he's confident her office's audits will be professionally conducted.

Consideration of a possible plenary council is supported by about 100 of the nation's 406 bishops. The hierarchy won't vote on the idea till a year from now, and an actual event would take several years beyond that to plan.

Archbishop Daniel Buechlein of Indianapolis, chairman of a special committee handling the proposal, said a survey of the bishops showed the major topics they want a council to treat are the identity of priests and bishops, education on Catholic teachings and the role of the laity.

Such a council would be an unusual event because church issues would be discussed not only by bishops but priests, sisters, theologians, educators and lay Catholics.

If the U.S. bishops vote for a council next year, it would not occur unless the Vatican approves.