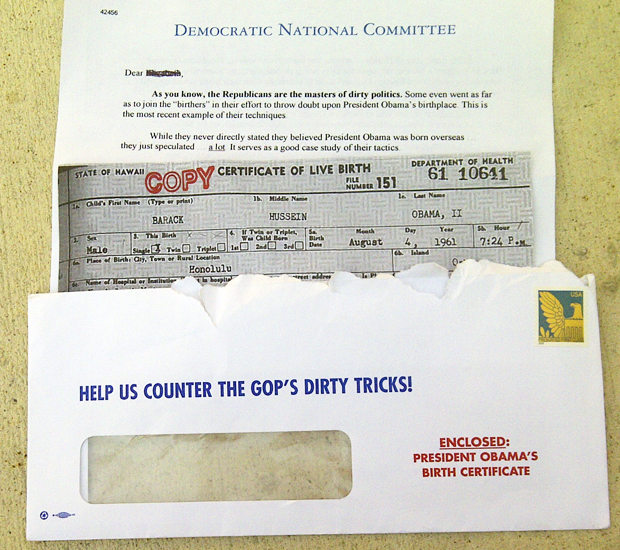 Three months after President Obama moved to end what he described as "the silliness" of the controversy over his birth certificate, the issue is back.

But this time it is the Democratic National Committee raising the issue in a pitch for campaign money.

The envelope is to potential donors is stamped "HELP US COUNTER THE GOP'S DIRTY TRICKS."

Recipients will indeed find a copy of the official State of Hawaii "Certificate of Live Birth."

A letter from DNC Chair Debbie Wasserman Schultz describes Republicans as "the masters of dirty politics."

"Some even went as far as to join the 'birthers' in their effort to throw doubt upon President Obama's birthplace," the letter added.

Donors who send at least $44.00 are promised a "Made in the USA" President Obama coffee cup with a copy of the birth certificate printed on the side.

On April 27 the president tried put the "birther" issue to rest by releasing a photo copy of his 1961 birth certificate.

"We don't have time for this silliness," Obama said in high-profile remarks, including a CBS News "special report."

He complained that the controversy was "the dominant news story" at the same time that the White House and Congress were in the early stages of crucial budget talks.

"We're not going to be able to solve problems if we get sidetracked by sideshows and carnival barkers," Mr. Obama told reporters.

He also noted that some people would continue to question whether he was really born in Hawaii "no matter what we put out."

The DNC letter plays off that theme, stating, "The Republicans know that if you sow enough seeds of doubt, misconceptions are sure to bloom."

The Obama White House, like its recent predecessors from both parties, tries to avoid commenting on campaign tactics.

A spokesman could not immediately confirm whether Mr. Obama personally approved the use of his birth certificate in a political mailing.

A party official said the president does not review direct mail copy sent by the DNC.

White House and party officials scoffed at any notion that the mailing would revive the "birther" issue.