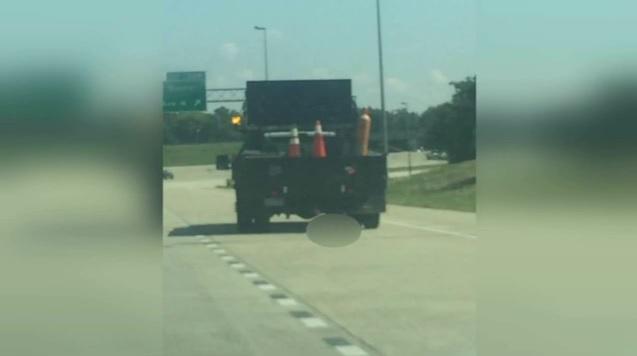 BIRMINGHAM, Ala. -- The Alabama Department of Transportation says "appropriate action will be taken" after photos were posted to Facebook showing a department truck dragging a dog's body on an interstate.

April Bennett was driving on Tuesday with her 5-year-old son on Interstate 20 when she spotted the lifeless body of a dog, which she says appeared to be a German shepherd, being dragged behind the truck.

Bennett began taking pictures with her phone. She says when the driver saw her, he pulled off the highway. Bennett says she told a friend and police were notified.

CBS affiliate WIAT-TV reports the graphic images show the dead dog being dragged by a truck owned by the Alabama Department of Transportation.

ALDOT spokeswoman Linda Crockett acknowledged a department crew found a dead dog on the interstate. She apologized for the manner in which the dog was disposed and says the incident is being investigated.

According to WIAT-TV, ALDOT released a written statement in response to the incident, which reads in part: "We regret the animal was disposed of in this manner and are taking steps to prevent further occurrences of this nature."