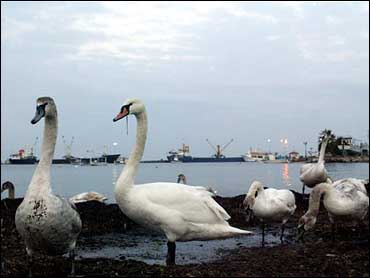 The deadly bird flu has reached Western Europe, with Italy and Greece announcing they had detected the H5N1 strain of the virus in dead swans, while the European Union confirmed the presence of the deadly strain in Bulgaria.

Saturday's announcement by Greece and Italy comes a day after the opening of the Winter Games in Turin, and marks the first time the potentially dangerous virus was detected in a EU country.

Authorities in Italy, Greece and Bulgaria said there were no reports of people being infected, and Italian Health Minister Francesco Storace sought to reassure Italians that the outbreak posed no immediate threat to humans, as the virus had only affected wild birds.

"It's a relatively safe situation for human health, less so for animal health," Storace said.

Also Saturday, authorities in Nigeria said they were investigating whether a deadly bird flu strain discovered in the West African country last week had spread to humans after at least two children were reported ill.

Bird flu has killed at least 88 people in Asia and Turkey since 2003, according to the World Health Organization. It has been ravaging poultry stocks across Asia since 2003, killing or forcing the slaughter of more than 140 million birds.

Almost all the human deaths have been linked to contact with infected poultry, but experts fear the virus could mutate into a form that spreads easily among humans, possibly sparking a human flu pandemic that could kill millions.

Experts said they were reassured by the fact that the virus has been detected in wild birds rather than on poultry farms, where it would be more likely to spread and where people would be in closer contact to infected birds.

"The risk to humans is less if the disease is in wildlife than if it is in poultry," said Juan Lubroth, a senior animal health officer at the Rome-based U.N. Food and Agriculture Organization.

The virus was found in five swans in the three southern Italian regions of Puglia, Calabria and Sicily, Storace said. The swans had arrived from the Balkans, he said, likely pushed south by cold weather.

The European Union issued a statement saying that Italy has agreed to apply the same precautionary measures as those adopted by Greece a day earlier. They include creating a two-mile high-risk, protection zone around each outbreak area, and a surveillance zone of an additional seven kilometers.

Tests will be done on samples of domestic birds inside the protection zone, where poultry is to be separated to avoid contact with other domestic birds. Birds that are infected or suspected of being infected will be killed.

Hunting wild birds will be banned in both zones, and poultry cannot travel out of the surveillance zone, the Italian Health Ministry said.

Also Saturday, the European Union reference laboratory in Weybridge, England, confirmed that samples from dead swans found within a 45-mile radius from the northern Greek city of Thessaloniki had tested positive for the H5N1 strain.

Authorities said health experts in the region were carrying out checks on farms and homes with poultry.

A senior Agriculture Ministry official said there was no immediate need to extend existing precautionary measures in an area near Thessaloniki, which is Greece's second-largest city.

"No new measures are required," Spyros Kyriakis said. "The 10 days within which the sick birds were contagious have passed without any reports of an outbreak among farm poultry. These birds were discovered 11 days ago, so there's no need to panic."

The EU also confirmed that wild swans in the Bulgarian wetland region of Vidin, close to the Romanian border, had tested positive for the H5N1 strain. The Bulgarian Health Ministry tried to calm fears, saying that so far no humans had caught the virus directly from wild birds.

"The incubation period for the disease has passed, and there are no reports of people infected with the bird flu virus," the ministry said.

But in Nigeria, Health Minister Eyitayo Lambo said authorities were trying to determine whether the H5N1 bird flu strain discovered on a farm in the northern state of Kaduna on Wednesday, the first time it was found in Africa, had spread to humans after several people were reported ill. Authorities have since reported the same virus in two other states.

Investigations were being conducted in the commercial capital, Lagos, and in Kaduna. Lambo gave no details, but said he expected results to be released Sunday.