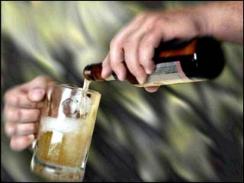 A new study has found colleges and universities with higher rates of binge drinking also have more rapes. In addition, nearly three-quarters of rape victims reported being intoxicated at the time of the attack.

Binge drinking is indisputably a major problem on most college campuses, as is rape. Previous research has indicated alcohol is associated with at least half of sexual assaults on female college students.

"That kind of drinking is quite prevalent," Wechsler said. "About 44 percent of college students can be classified as binge drinkers in our national study."

Women who attended schools with high and medium heavy episodic drinking rates had, respectively, 1.8-fold and 1.5-fold increased odds of being raped while intoxicated compared to women at schools with low rates.

In addition, women who were under 21, lived in sorority houses, used illicit drugs and drank heavily in high school had a higher risk of being raped while intoxicated.

"I think it's very important to do the education about alcohol consumption, together with education about rape, since such a large proportion of rapes are connected to drinking," Wechsler said.

"Alcohol and drugs dis-inhibit people," said Paul Rinaldi, associate director of the Addiction Institute of New York City. "In a lot of these young women, their judgment is impaired. Their radar is clouded with alcohol. When they're clearheaded, they might say, 'This guy is not someone I want to be alone with.'"

That's not to say the victim is to blame, Rinaldi stressed.

Rape victim advocates were critical of the findings, which appeared in a recent issue of the Journal of Studies on Alcohol.

"Binge drinking is unhealthy. No one questions that, but putting the blame for rape on alcohol is an excuse. In reality, the decision of the attacker to commit rape is the only cause of that crime," said Jamie Zuieback, a spokeswoman for the Rape, Abuse & Incest National Network in Washington, D.C.

"We've worked very hard to foster a simple, undisputable understanding that rapists alone are responsible for this decision to commit this heinous crime. I think that this kind of study can be very harmful to that message. This is a crime. It's criminal behavior, period."

The study authors deny they have done this. What's more, Wechsler and his colleagues are hoping the findings will be used to ramp up college prevention programs.

"Most efforts around drinking are tied to automobile fatalities, and people are generally aware of this connection," Wechsler said. "In the public, there's less of a realization of the relationship of heavy alcohol use to rape."