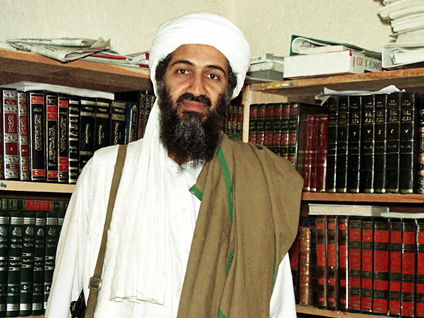 Strike smaller cities, bin Laden suggested. Target trains as well as planes. Above all, kill as many Americans as possible in a single attack.

Though he was out of the public eye and al Qaeda seemed to be weakening, bin Laden never yielded control of his worldwide organization, U.S. officials said Wednesday. His personal, handwritten journal and his massive collection of computer files reveal his hand at work in every recent major al Qaeda threat, including plots in Europe last year that had travelers and embassies on high alert, two officials said.

They described the intelligence to The Associated Press only on condition of anonymity because they were not authorized to talk publicly about what was found in bin Laden's hideout. Analysts are continuing to review the documents.

The information shatters the government's conventional thinking about bin Laden, who had been regarded for years as mostly an inspirational figurehead whose years in hiding made him too marginalized to maintain operational control of the organization he founded.

Instead, bin Laden was communicating from his walled compound in Pakistan with al Qaeda's offshoots, including the Yemen branch that has emerged as the leading threat to the United States, the documents indicate. Though there is no evidence yet that he was directly behind the attempted Christmas Day 2009 bombing of a Detroit-bound airliner or the nearly successful attack on cargo planes heading for Chicago and Philadelphia, it's now clear that they bear some of bin Laden's hallmarks.

Don't limit attacks to New York City, he said in his writings. Consider other areas such as Los Angeles or smaller cities. Spread out the targets.

In one particularly macabre bit of mathematics, bin Laden's writings show him musing over just how many Americans he must kill to force the U.S. to withdraw from the Arab world. He concludes that small attacks had not been enough. He tells his disciples that only a body count of thousands, something on the scale of the Sept. 11, 2001, attacks, would shift U.S. policy.

He also schemed about ways to sow political dissent in Washington and play political figures against one another, officials said.

The communications were in missives sent via plug-in computer storage devices called flash drives. The devices were ferried to bin Laden's compound by couriers, a process that is slow but exceptionally difficult to track.

Intelligence officials have not identified any new planned targets or plots in their initial analysis of the 100 or so flash drives and five computers that Navy SEALs hauled away after killing bin Laden. Last week, the FBI and Homeland Security Department warned law enforcement officials nationwide to be on alert for possible attacks against trains, though officials said there was no specific plot.

Officials have not yet seen any indication that bin Laden had the ability to coordinate timing of attacks across the various al Qaeda affiliates in Pakistan, Yemen, Algeria, Iraq and Somalia, and it is also unclear from bin Laden's documents how much the affiliate groups relied on his guidance. The Yemen group, for instance, has embraced the smaller-scale attacks that bin Laden's writings indicate he regarded as unsuccessful. The Yemen branch had already surpassed his central operation as al Qaeda's leading fundraising, propaganda and operational arm.

Al Qaeda has not named bin Laden's successor, but all indications point to his No. 2, Ayman al-Zawahri. The question is whether al-Zawahri, or anyone, has the ability to keep so many disparate groups under the al Qaeda banner. The groups in Somalia and Algeria, for instance, have very different goals focused on local grievances. Without bin Laden to serve as their shepherd, it's possible al Qaeda will further fragment.