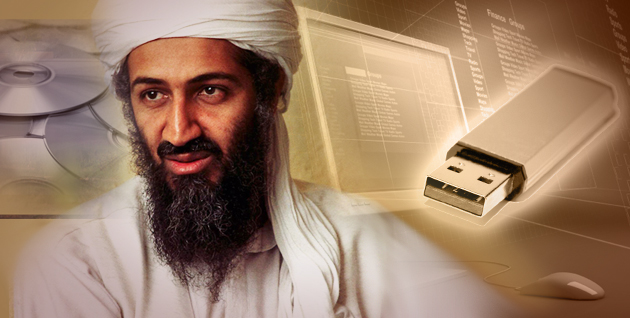 The raid on Osama bin Laden's Pakistan home produced what could be the biggest intelligence windfall since 9/11. Some of the most critical evidence was recovered from Osama bin Laden himself.

CBS News correspondent Bob Orr reports that after Navy SEALS scrambled away with the body of the al Qaeda leader, they made a startling discovery: Sewn inside bin Laden's clothing was cash, 500 Euros, and two phone numbers apparently intended to aid an escape.

Now, intelligence analysts are digging into those numbers, tracing previous calls to and from those phones, mapping out a network of terrorist communications.

CBS News national security analyst Juan Zarate says they could reveal who bin Laden was talking to, who he was directing, as well as other phone numbers linked to al Qaeda operatives.

The bin Laden compound gave up more evidence than U.S. officials had ever expected: At least five computers, a dozen hard drives, storage devices such as DVDs and thumb drives and more than one hundred computer disks. The SEALs also grabbed handwritten notes, weapons, and an assortment of personal items that could reveal key clues about other high-ranking al Qaeda leaders and potential plots. It appears everything was being brought to and from the compound by couriers.

Digital forensic and evidence recovery specialists were part of the raid team -- springing into action after the compound was secured. The team had to rapidly preserve everything, freezing everything on computers so that it didn't get wiped out. The recovery specialists had to be particularly careful before they unplugged the computers not to trigger software programs designed to destroy hard drives or delete data that may have been installed by bin Laden's people as protection, reports CBS News producer Pat Milton.

"The trick was to get it out fast but to preserve everything, a source said, "for intelligence purposes first but also for evidence for possible prosecutions,'' of terrorists.

Among the material confiscated was al Qaeda propaganda material including al Qaeda messaging strategies to inspire and recruit new Jihadists. There is some indication that bin Laden was continuing to develop his strategy to utilize homegrown operatives that were intimately familiar with the countries in which they lived. There was also material on current events, in an apparent effort to keep bin Laden abreast on news from around the world.

Sources say much of the material is encrypted, so the messages could not be read if they were intercepted and could take some time to decipher. Some of the recovered material is in Arabic. The terror treasure is being protectively stored at the FBI lab in Quantico, where forensics experts are analyzing fingerprints, DNA and trace evidence.

Meanwhile, a task force led by the CIA is digging through copies of the electronic files, looking for names, numbers, and possible locations of terror operatives.

"As we glean information from that material we will make appropriate decisions with regard to who might be added to the terrorist watch list, the no-fly list, all those things," said Attorney General Eric Holder.

The first priority, sources tell CBS News, is for analysts to determine if the mother-lode of data contains any actionable plots in the works against the U.S. and western interests. Analysts will also seek to identify any al Qaeda operatives or extremists in the United States or elsewhere.

The compound did not appear to have been used as a nerve center or a command and control post, but analysts are looking further to determine the extent of bin Laden's involvement in day to day decisions and long-term strategy.

Officials hope the intelligence coup pressures al Qaeda into making mistakes. If, for example, bin Laden's deputy and apparent successor Ayman Zawahiri decides to run, he could be more vulnerable.

There is a growing sense among counterterrorism officials that core al Qaeda is on the ropes. The hope is the evidence haul may help the U.S. deal another significant blow.