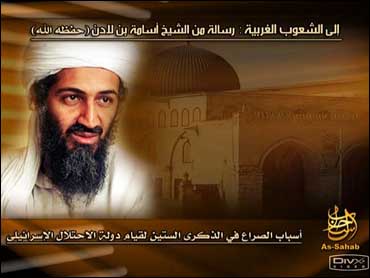 Al Qaeda's media operation has released a new audio message on the Internet from Osama bin Laden, dealing primarily with Israel and the Palestinians on the 60th anniversary of Israel's creation.

The message, downloaded by CBS News from the prominent jihadist Web forum El Ekhlas, did not include any new images of the al Qaeda chief.

The 9:40-minute audio by bin Laden showed an old photo of his face over a brown graphic and included the title, "A Message to the Peoples of the West: From Sheik Osama bin Laden," with the subheading: "The Reasons for the Struggle on the 60th Anniversary of the Creation of the Occupation State of Israel."

Bin Laden began his message by telling listeners that the Palestinian-Israeli conflict has always been the primary cause for friction between the West and the Muslim world - a struggle which he said was getting more difficult due to European policies biased in Israel's favor.

"The Palestinian cause has been the main factor that, since my early childhood, fueled my desire, and that of the 19 freemen (Sept. 11 bombers), to stand by the oppressed, and punish the oppressive Jews and their allies," the al Qaeda chief said.

"We shall continue the fight, Allah willing, against the Israelis and their allies, in order to pursue justice for the oppressed, and we shall not give up one inch of Palestine, as long as there is still a single true Muslim alive."

Meanwhile, President Mr. Bush wrapped up his visit to Israel Friday, commemorating the anniversary of the country's creation - a visit which he used to again urge both sides of the Israeli-Palestinian conflict to negotiate a peace settlement.

His visit, however, drew frustration from Palestinians, many of whom view the American leader as a biased friend of Israel. On the other side, few Israelis had hope that Mr. Bush could evoke the good will to see an agreement reached by the end of year - his long-stated goal.

Palestinians marked the 60th anniversary of Israel's creation with demonstrations and solemn ceremonies on Thursday - a stark contrast to Israel's joyous birthday celebrations. Palestinians refer to the anniversary as the "nakba," Arabic for catastrophe.

In the audio released Friday, bin Laden said the celebrations proved "that 60 years ago, the state of Israel did not exist. It was forcefully created on Palestinian land under the fire of the weapons, and this is evidence that the Jews are invader occupiers who should be fought."

Mr. Bush's embrace of Israel at a time when the Palestinians were mourning was bound to further harm the tainted U.S. image in the Palestinian areas and across the Arab world.

Palestinian analyst Hani al-Masri said Mr. Bush cannot be a peacemaker if he sides with Israel. "It is not a peace process. It is a process without peace," he told CBS News correspondent Robert Berger.

In a speech to the Knesset, or parliament, Mr. Bush asserted Thursday that the United States has an unbreakable bond with Israel. He said Americans believe that Israel has a right to defend itself from extremists and "killers pledged to its destruction."

Bin Laden reserved much of his new audio address for an attack on the Western media, which he accused of misleading the public to show "the Israeli invaders as the victims."

"On the other hand, they portrayed the Palestinians, who are claiming back their lands, as merciless terrorists," he said. "The media has contributed to the shaping of a misled public opinion that made it possible to involve Western nations in an unjust war against us, as has been the case in Iraq."

Al Qaeda has dramatically increased the pace of its messages since last year.