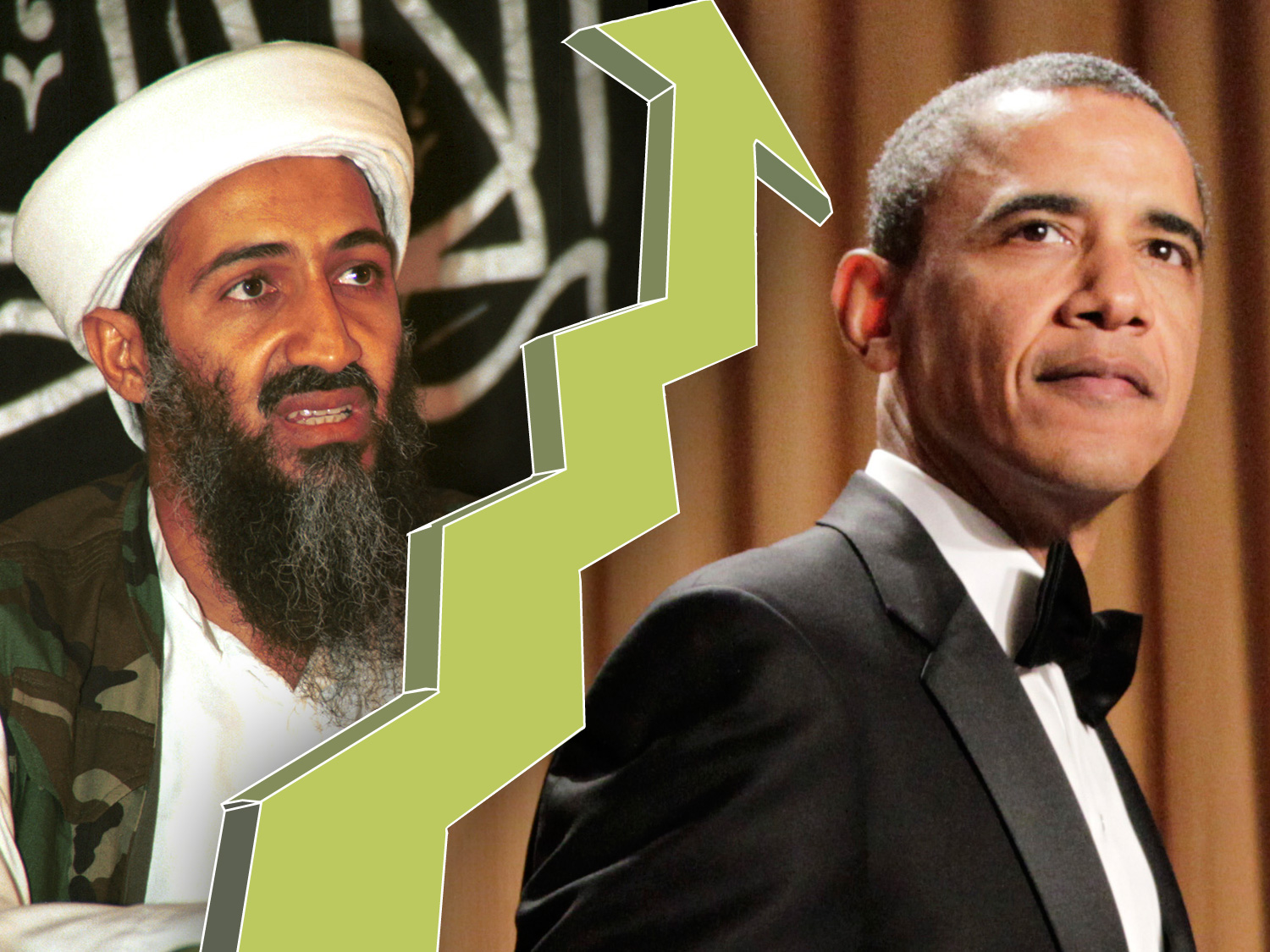 A new CBS News/New York Times poll shows President Obama's overall approval rating has jumped by an impressive 11 percentage points in the wake of the U.S. military mission which killed Osama bin Laden, and there is overwhelming support for how Mr. Obama handled the situation.

But Americans do not feel safer. In fact, the poll shows that six out of every ten Americans believe the threat of terrorism will increase in the U.S. over the next few months as a result of bin Laden's death.

The poll found that 57 percent of Americans generally approve of Mr. Obama in the wake of the raid in Pakistan. Two weeks ago, when bin Laden was still America's most-wanted terrorist, the president's overall approval rating was at 46 percent. A whopping 85 percent of those polled gave Mr. Obama high marks for his handling of the operation to find bin Laden.

It's unclear, however, how long Mr. Obama's rise in the polls will last.

In a CBS News Poll conducted in December 2003, just after the U.S. military captured Saddam Hussein in Iraq, President George W. Bush received a 60 percent approval rating -- a jump of about six percentage points. But it was short-lived, and his poll numbers never reached that height again.

Republican presidential hopefuls likely are banking on a similar ephemeral boost for Obama -- a temporary state of mind among voters which will fade long before they head to the polls in November 2012.

Many Republicans say the economy, and its languishing recovery, will be the key issue next year, not al Qaeda. If they're correct, the new poll numbers are less encouraging for Mr. Obama; he receives his lowest rating to date on the economy - just 34 percent approval.

As for the actual significance of bin Laden's death in America's ongoing fight against militant extremism, 47 percent of those polled called the al Qaeda leader's demise a major victory for the U.S., while another 40 percent said it was just a minor victory.

Even as Americans view the death of bin Laden as a victory, they are also bracing for a possible terrorist attack in the U.S. in retaliation. The percentage of Americans who think a terrorist attack within the U.S. in the next few months is at least somewhat likely has risen 15 percentage points, from 54 percent in November to 69 percent today. It is now the highest it has been since mid-2004.

Approval ratings for the president's handling of the threat of terrorism, the war in Afghanistan, and foreign policy in general have increased in the wake of bin Laden's death.

A significant 72 percent of Americans (including 53 percent of Republicans) approve of the president's handling of terrorism, his highest rating on the issue since talking office.

"This shows that the president was not only ready to act, but had his eye on the ball," says CBS News political analyst John Dickerson, and that could deprive Republican opponents of a key weapon used to attack Mr. Obama in the past -- a perceived lack of gravitas in dealing with defense issues.

This poll was conducted by telephone on May 2-3, 2011 among 532 adults nationwide who were first interviewed by CBS News for a 60 Minutes/Vanity Fair Poll April 28-May 1, 2011. Phone numbers were dialed from samples of both standard land-line and cell phones. The error due to sampling for results based on the entire sample could be plus or minus four percentage points. The error for subgroups is higher. This poll release conforms to the Standards of Disclosure of the National Council on Public Polls.