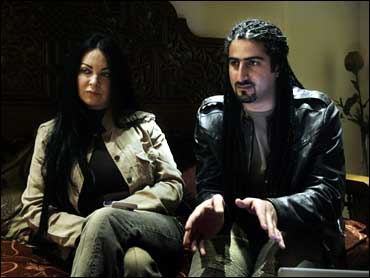 Omar Osama bin Laden bears a striking resemblance to his notorious father - except for the dreadlocks that dangle halfway down his back. Then there's the black leather biker jacket.

The 26-year-old does not renounce his father, al Qaeda leader Osama bin Laden, but in an interview with The Associated Press, he said there is better way to defend Islam than militancy: Omar wants to be an "ambassador for peace" between Muslims and the West.

Omar - one of bin Laden's 19 children - raised a tabloid storm last year when he married a 52-year-old British woman, Jane Felix-Browne, who took the name Zaina Alsabah. Now the couple say they want to be advocates, planning a 3,000-mile horse race across North Africa to draw attention to the cause of peace.

"It's about changing the ideas of the Western mind. A lot of people think Arabs - especially the bin Ladens, especially the sons of Osama - are all terrorists. This is not the truth," Omar told the AP last week at a cafe in a Cairo shopping mall.

Of course, many may have a hard time getting their mind around the idea of "bin Laden: peacenik."

"Omar thinks he can be a negotiator," said Alsabah, who is trying to bring her husband to Britain. "He's one of the only people who can do this in the world."

Omar lived with the al Qaeda leader in Sudan, then moved with him to Afghanistan in 1996.

There, Omar says he trained at an al Qaeda camp but in 2000 he decided there must be another way and he left his father, returning to his homeland of Saudi Arabia.

"I don't want to be in that situation to just fight. I like to find another way and this other way may be like we do now, talking," he said in English.

He suggested his father did not oppose his leaving - and Alsabah interjected that Omar was courageous in breaking away, but neither elaborated.

Although there is no way to confirm the details he describes of his childhood and upbringing, the strong family resemblance and Omar's knowledge of Osama's family life have convinced many of his lineage.

"Omar Bin Laden is the son of Osama bin Laden and his first wife, Najwa," a U.S. intelligence official said Thursday, speaking on condition of anonymity because he was not authorized to talk to the media. The official confirmed Omar was raised in Sudan and Afghanistan after his father was forced out of Saudi Arabia.

Omar and his wife insist they have not been bothered by Egyptian officials, who said Thursday that the terror leader's son did not pose a threat.

"He comes and goes just like any other tourist," said a security official, also speaking on condition of anonymity because he was not authorized to speak to the media. "He is taking a line that is totally different from him father."

Omar said he hasn't seen or been in contact with his father since leaving Afghanistan. "He doesn't have e-mail," Omar said. "He doesn't take a telephone ... if he had something like this, they will find him through satellites."

"My father thinks he will be good for defending the Arab people and stop anyone from hurting the Arab or Muslim people any place in the world," he said, noting that the West didn't have a problem with his father when he was fighting the Russians in Afghanistan in the 1980s.

Omar is convinced a truce between the West and al Qaeda is possible.

"My father is asking for a truce but I don't think there is any government (that) respects him. At the same time they do not respect him, why everywhere in the world, they want to fight him? There is a contradiction," he said.

Osama bin Laden, believed to be in hiding in the Pakistan-Afghan border region, offered a truce to Europe in a 2004 audiotape and a conditional truce to the United States in a 2006 message. In November, he called on European nations to pull out of Afghanistan in a message seen by some experts as an effort to reach out to Europe.

But in a series of messages since last fall, he also has been calling for Muslims to rally around jihad, or "holy war," encouraging fighters in Iraq in particular to continue their battles with U.S. and Iraqi forces.

At least two of Osama bin Laden's sons, Hamza and Saad, are believed to have an active role in al Qaeda - with Hamza believed to be in the Pakistan-Afghan border zone and Saad thought to be in Iran, perhaps in Iranian custody.

But most of the al Qaeda leader's children, like Omar, live as legitimate businessmen. The family as a whole disowned Osama in 1994 when Saudi Arabia stripped him of his citizenship because of his militant activities.

The family is wealthy: Osama bin Laden's billionaire father Mohammed, who died in 1967, had more than 50 children and founded the Binladen Group, a construction conglomerate that gets many major building contracts in the kingdom.

(AP/Omar Osama bin Laden)
Since leaving his father's side, Omar has lived in Saudi Arabia, where he runs a contracting company connected with the Binladen Group, but he spends much of his time in Egypt. It was during a desert horseback ride at the Pyramids of Giza that he met his wife.

Their marriage in April made them tabloid fodder, particularly in Britain, where headlines touted the "granny who married Osama bin Laden's son." Alsabah, who has married five times, has five grandchildren.

The couple has applied for a visa to Britain. And they are planning their endurance horse race across North Africa, which they hope to start in March. It is in the planning stages - they are seeking approval of governments along the route and need sponsors to help pay for the event and raise money for child victims of war.

Omar said they plan to ride 30 miles a day, with periodic weeklong rests in each country.

Teams from around the world will be encouraged to join in what the couple envisions as an equine version of the Paris-Dakar car rally. That rally was canceled this year due to fears over terrorist threats made by al Qaeda-affiliated groups in North Africa.

Omar, however, said he isn't worried.

"I heard the rally was stopped because of al Qaeda," he said. "I don't think they are going to stop me."