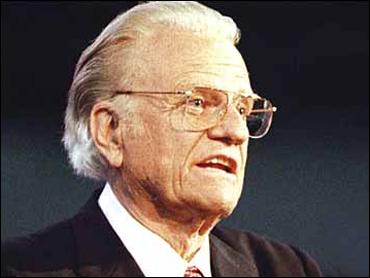 The Rev. Billy Graham plans to speak on four consecutive days at Texas Stadium starting Thursday in what could be the last revival meeting the evangelist ever holds after more than a half-century of preaching.

Graham turns 84 on Nov. 7, suffers from Parkinson's disease, underwent surgery to remove fluid from his brain two years ago and is generally in frail health.

While in Cincinnati for a meeting in June, Graham said that he felt weaker than ever. He has announced no future meetings, and an aide said he will weigh his plans after the Texas event.

But speaking to reporters Tuesday, Graham said "I feel a lot better here than I did in Cincinnati when we began this four months ago."

Graham addressed reporters, but did not take questions, while sitting in a golf cart Tuesday morning before taking a tour of stadium preparations.

"This type of meeting is needed," he said. "It's needed in every city in the country and it's needed at this particular hour in the history of the world."

Graham is scheduled to preach each of the four days the event is held at the stadium. If his health prevents him from speaking, Graham's son and designated successor, Franklin Graham, would step in. Country star Randy Travis is among the scheduled guests.

An interdenominational committee invited Graham to Dallas last fall. Since then, nearly 500 churches representing 36 denominations have been preparing for his arrival.

"A bunch of us in Dallas felt like it was a prime moment when we really needed Dr. Graham's message, and we realized that there was not going to be too many opportunities for him to ever come back to Dallas," said the Rev. Ronald W. Scates, pastor of the prominent Highland Park Presbyterian Church.

"The one thing that attracts me is the aura that seems to surround him personally, and his message is right to the point and very simple," said longtime sports broadcaster Pat Summerall, who expects to present his testimony during the meetings. "Anyone knows what they have to do if they just listen to him."

Graham said in an interview with The Dallas Morning News last week that he hopes to bring a message of love to a diverse audience.

"You have Buddhists, Hindus and Muslims," he said. "I'll talk about racial understanding and racial harmony between ethnic groups and religious groups because I love all of them, and I know God loves them all."

Franklin Graham has been criticized for remarks about Islam, which he called a "very evil and wicked religion."

The senior Graham has however made a change in response to Muslim feelings about the word "crusade," which is seen as offensive because of the Christian wars years ago against non-Christians. The Rev. Billy Graham's revival meetings, for years billed as "crusades," are now called "missions."

"Following September 11th, there was increased consciousness of other faiths in the U.S. that would find the term 'crusade' offensive," said spokeswoman Melany Ethridge.

Graham entered the big time with his 1949 Los Angeles meetings and in 1950 founded the Billy Graham Evangelistic Association to win converts through radio, television and sermon. He has preached Christianity to more people in live audiences than anyone in history except possibly Pope John Paul II - more than 210 million people in more than 185 countries and territories by count of his organization.

This is Graham's first appearance in the area since then-Dallas Cowboys coach Tom Landry helped him organize a meeting at Texas Stadium in 1971. It was the first event at the stadium, which had just been constructed.