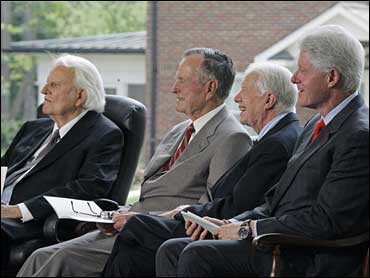 A frail Billy Graham, using a walker and leaning on his son Franklin, was honored Thursday by three former presidents as they dedicated a North Carolina museum built to be a "living crusade" that will carry on his work after the minister is gone.

The $27 million Billy Graham Library traces the evangelist's journey from farm boy to the most widely heard minister of all time.

"This building behind me is just a building," Graham said in brief remarks. "It's an instrument, a tool for the Gospel. The primary thing is the Gospel of Christ."

Only On The Web: Byron Pitts talks to Franklin Graham about his father and the new library.

In a keynote address to a crowd of about 1,500, President George H.W. Bush wept as he said how much the minister meant to him, calling Graham "a spiritual gift to all of us." Bush noted Graham had comforted four generations of his family; that includes President George W. Bush.

Presidents Jimmy Carter and Bill Clinton recalled how Graham's insistence that his crusades in packed stadiums be racially integrated helped bring blacks and whites together in the South.

But Clinton said Graham is just as impressive for his personal kindness.

"When he prays with you in the Oval Office or upstairs in the White House, you feel he's praying for you, not the president," Clinton said.

Graham, 88, suffers from fluid on the brain, prostate cancer and Parkinson's disease, and is largely confined to his home in Montreat, N.C. His hair thinning and his face dotted with age spots, he was driven by golf cart to the outdoor stage, where aides helped him to his seat in heat inching toward 90 degrees. His wife Ruth, 86, has degenerative osteoarthritis of the back and neck and is bedridden at their home.

The 40,000-square-foot complex was built on the grounds of the Billy Graham Evangelistic Association, and among its designers was the ITEC Entertainment Co., of Orlando, Fla., which has done work for Disney and other theme parks. The dairy farm where the preacher grew up is just a few miles from the site and the library reflects his roots.

The cavernous lobby is meant to resemble a barn with scattered bales of hay and milk cans. The sounds of a cackling chicken and neighing horse are piped in. The first Bible verse Graham's mother taught him, John 3:16, "For God so loved the world that he gave his one and only Son," is engraved onto a rafter.

To the right is a cow shed, where a display that has drawn the most curiosity stands. An animatronic black-and-white cow named Bessie says in a southern drawl that Graham has been "preaching the pure milk of God's word for 60 years." Bessie tells kids to "get moo-ving" to learn more about the preacher.

Critics have dubbed the display the "Golden Calf" and say it cheapens Billy Graham's legacy. But Franklin Graham said it is meant as an appeal to children.

The museum, which reporters toured before the ceremony Thursday, is more heartfelt tribute than scholarly review.

Graham's personal papers will be stored at the museum, while documents related to his crusades will remain in an archive at Wheaton College, the prominent evangelical school in Illinois where the minister and his wife met as students.

There are photos of Graham with the U.S. presidents he befriended and displays of gifts they gave him, including a golf club and a check that President Nixon had given the preacher as an offering. However, there is no mention of how Graham's close ties with Nixon had cast a shadow on the minister.

Old TV sets broadcast clips of the troubled times in America when Graham preached, including the Civil Rights era. Graham has been praised for integrating his crusades starting in 1953, but also criticized for his restrained support for the movement.

Designers have recreated the scene of Graham's 1949 Los Angeles tent revival, dubbed the "Canvas Cathedral," that lasted for weeks, drawing national attention to his ministry for the first time. A replica of the Berlin Wall is meant to underscore how remarkable it was that Graham won permission from communist governments to evangelize behind the Iron Curtain.

Billy Graham's children have been divided over where their parents should be buried — at the library or at The Cove, a Bible training center near the Grahams' home. Franklin Graham believes his parents have decided the location, but "haven't made that public yet."