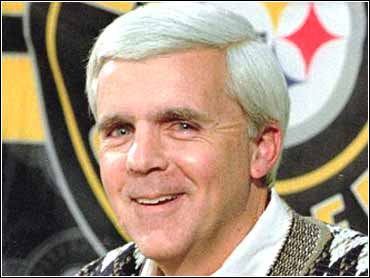 Tom Donahoe's first task as president and general manager of the Buffalo Bills is to find a coach.

Donahoe, hired Wednesday, is just the second president of the NFL team, following Bills owner Ralph Wilson, who held the title for 41 years.

"In my discussions with him over the past two weeks I feel he is the most qualified man to oversee the Bills football operations," said Wilson.

Donahoe's hiring comes two days after Wilson fired Wade Phillips as coach. Credited with helping rebuild the Pittsburgh Steelers in the 1990s, the 53-year-old Donahoe will attempt to do the same for the Bills.

There has been speculation that Donahoe will go with a coach that he has experience working with. Current NFL assistants Chan Gailey and Dom Capers both fit that description and both have NFL head coaching experience, Gailey with Dallas and Capers with Carolina.

Bills defensive coordinator Ted Cottrell does not have a previous working relationship with Donahoe but is the favorite candidate among Bills players and received a recommendation from Phillips.

Donahoe was in San Francisco for the East-West Shrine game and could not be reached for comment. A Bills spokesman said that Donahoe would decline comment until a news conference on Friday in Buffalo to formally announce his hiring.

Donahoe was instrumental in helping the Steelers make six straight playoff appearances in the 1990s. Pittsburgh played in three AFC championship games and reached the Super Bowl in 1996. Donahoe was lauded for his ability to keep the Steelers among the elite teams of the AFC despite losing stars like Chad Brown, Hardy Nickerson and Kevin Greene to free agency over the years.

He was fired a year ago following 14 years with Pittsburgh, the last eight as the Steelers' director of football operations, after a power struggle with Steelers head coach Bill Cowher. He has spent the past season as a football analyst with ESPN.com.