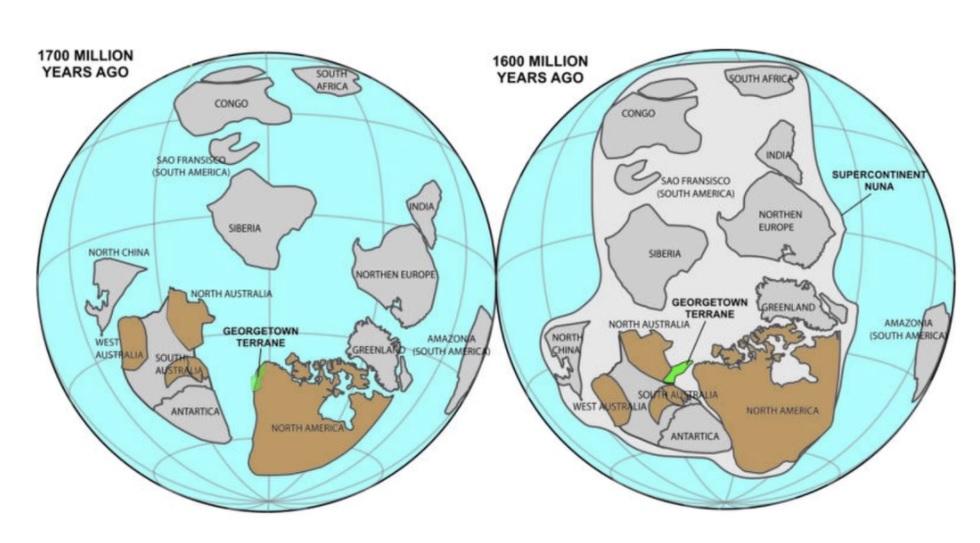 Geologists matching rocks from opposite sides of the globe have found that part of Australia was once attached to North America 1.7 billion years ago. Researchers from Curtin University in Australia examined rocks from the Georgetown region of northern Queensland.

The rocks — sandstone sedimentary rocks that formed in a shallow sea — had signatures that were unknown in Australia but strongly resembled rocks that can be seen in present-day Canada.

The researchers, who described their findings online Wednesday in the journal Geology, concluded that the Georgetown area broke away from North America 1.7 billion years ago. Then, 100 million years later, the landmass collided with what is now northern Australia at the Mount Isa region.

"This was a critical part of global continental reorganization when almost all continents on Earth assembled to form the supercontinent called Nuna," Adam Nordsvan, a Curtin University doctoral student and lead author of the study, said in a statement.

Nordsvan added that Nuna then broke apart some 300 million years later, with the Georgetown area stuck to Australia as the North American landmass drifted away.

The continents, as we know them today, have shifted places throughout Earth's 4-billion-year history. Most recently, these landmasses came together to form the supercontinent known as Pangaea about 300 million years ago. Geologists are still trying to reconstruct how even earlier supercontinents assembled and broke apart before Pangaea. Scientists first proposed the existence of Nuna, Earth's first supercontinent, in 2002. Nuna is sometimes called Columbia.

Previous research suggested that northeast Australia was near North America, Siberia or North China when the continents came together to form Nuna, Nordsvan and colleagues noted, but scientists had yet to find solid evidence of this relationship.

Colliding landmasses can form mountain ranges. For example, the clash of the continental plates of India and Asia about 55 million years ago created the Himalayas. The researchers of the new study say they found evidence of mountains forming when Georgetown rammed into the rest of Australia.

"Ongoing research by our team shows that this mountain belt, in contrast to the Himalayas, would not have been very high, suggesting the final continental assembling process that led to the formation of the supercontinent Nuna was not a hard collision like India's recent collision with Asia," Zheng-Xiang Li, a co-author of the study and a professor of Earth science at Curtin University, said in the statement.