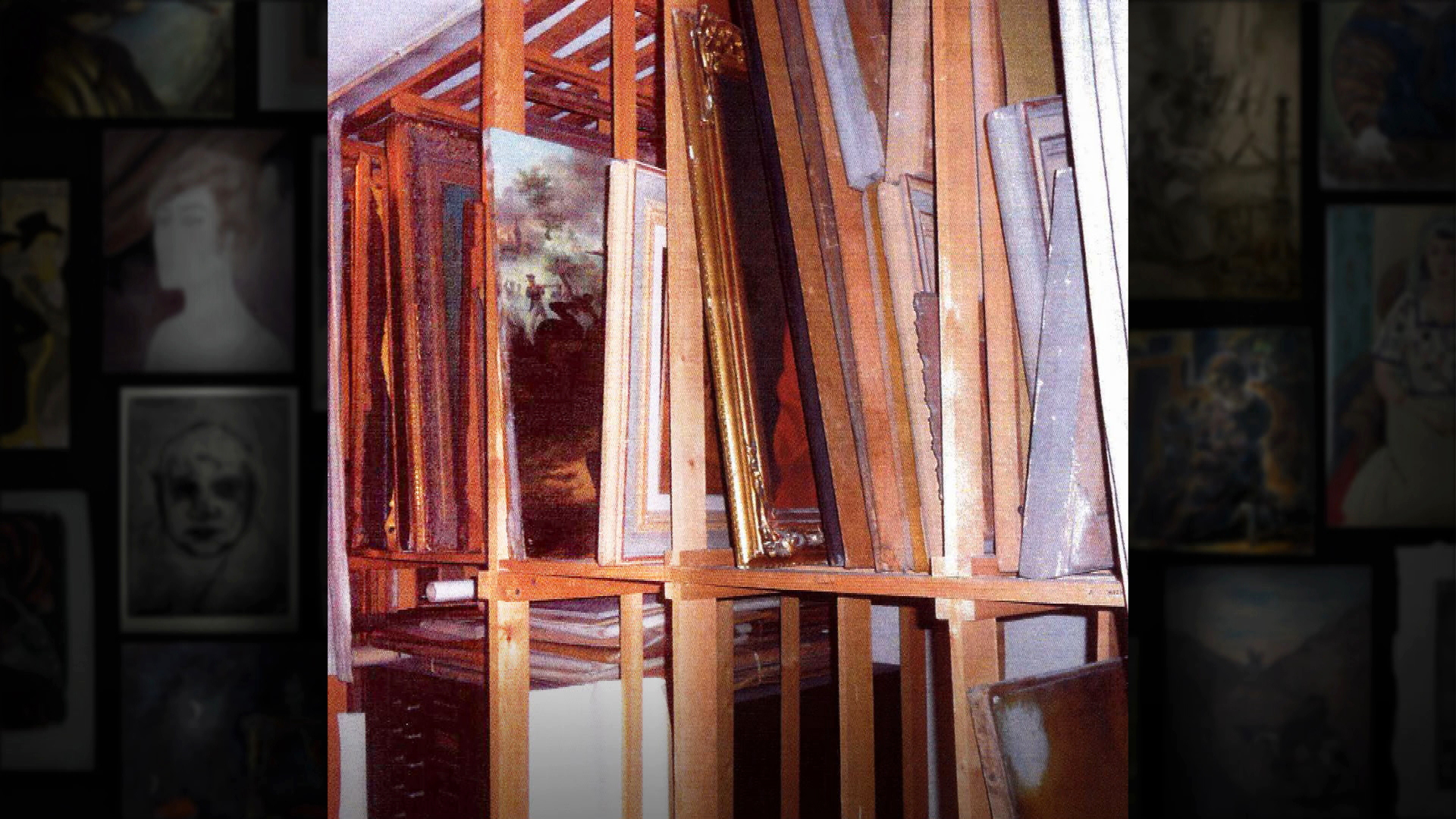 The following is a script from "Discovered" which aired on April 6, 2014. Morley Safer is the correspondent. Katy Textor, producer.

Two years ago, German authorities conducting a routine tax investigation stumbled on the largest trove of missing art since the end of World War II. The massive collection -- barely a fraction of the hundreds of thousands of artworks still missing -- was discovered in a Munich apartment owned by Cornelius Gurlitt, the reclusive 81-year-old son of one of Hitler's favorite art dealers. Most of it was art plundered from museums and from Jewish collections.

For Germans, it was an unwelcome reminder of a bitter history. To the heirs of the victims, it's perhaps a last chance to recover a small vestige of family history. The discovery also triggered a legal battle about who really owns that art.

Morley Safer: Did you have any idea that he had so many paintings in that apartment?

Ekkeheart Gurlitt: I tell you what. Nobody had any idea about this. Really. How can you live with 1,400 paintings in a flat? A 90 square meter flat, I thought, maybe has 100 or 150 but one thou-- we are laugh everybody was surprised, you know.

Ekkeheart Gurlitt: His friends were his paintings, right. And for the last 60 years he was living with his paintings, which was his-- his idea of life, you know.

Morley Safer: You've got it right down to the last one.

Gurlitt's small world fell apart in late 2010 almost by accident. Traveling back from Switzerland to Germany, a customs inspection brought him under suspicion and triggered a tax investigation that would be his undoing.

Willi Korte: They had caught him on a train with 9,000 Euros in cash in his pocket which made him suspicious. Then they tried to look him up here in their files and they couldn't find him. The man didn't seem to exist. He wasn't registered. He didn't pay taxes. He didn't receive any benefits. So the man just wasn't there.

Willi Korte is a lawyer who specializes in tracking down stolen art.

Willi Korte: I can imagine sort of the conclusions they drew when they saw this old man surrounded by hundreds and hundreds of works of art. "There's something very fishy going on. And maybe he's a secret art dealer. Maybe he's involved in some smuggling activities. There must be enormous amounts of money at stake."

It was on February 28, 2012, that agents from the German customs police raided a fifth floor apartment in this nondescript building in Munich. It's fair to say they were blown away by what they found: 1,400 works of art, some of them worth millions. They also found 80-year-old Cornelius Gurlitt, a virtual hermit, who's said the only friends he had in this world were his art.

Art thought to be worth over a billion dollars. Art piled on shelves. Much of it art the Nazis declared to be degenerate. It was art taken from the walls of museums and from Jewish-owned galleries and collectors. All of it acquired by Hildebrand Gurlitt, Cornelius's father. He was a leading art dealer chosen by Hitler to sell the art to customers abroad for hard currency. Much of it featured in a 1937 degenerate art show in which Hitler wanted to show Germans what he regarded as the decadence and depravity of modern avant-garde art.

Art historian Vanessa Voigt, a specialist in art of that era, was called in by police during the raid.

Vanessa Voigt: I saw there Cornelius Gurlitt. He is an-- a man who is ill. He was afraid and he didn't speak.

Cornelius sat stunned as agents went through his apartment.

Morley Safer: Did he say anything to you or to the agents from the government?

Vanessa Voigt: No. He was really shocked of this situation, I think. In this apartment, there were no people for many, many years. I think there were perhaps an art dealer, but no one else.

Morley Safer: Did he seem to be sane?

Vanessa Voigt: Yeah. He was.

His cousin says after Cornelius' father died he never allowed anyone into the apartment or his crumbling house in Salzburg, Austria, where he kept a collection of 238 works of art of immense value like this painting by Monet.

Ekkeheart Gurlitt: He gave him the whole-- the collection of these paintings as inheritance, right? For-- so to-- to survive. So every time Cornelius would run out of money, he sold one of these paintings, right?

Almost overlooked among the cache was a small drawing of a piano player by the German romanticist Carl Spitzweg. It is a drawing Martha Hinrichsen has spent the better part of her life trying to track down. The Nazis had confiscated it from her grandfather, Henri Hinrichsen, along with his entire art collection.

Morley Safer: Before the Gurlitt collection was discovered had you pretty much given up hope?

Martha Hinrichsen: I was absolutely stunned. I wasn't expecting anything like that.

During the raid, agents found Gurlitt's father's records from 1940 which reveal details of a sale of four works once owned by her grandfather. The sale was really theft by other means. Hinrichsen never received the money. In 1942, he was gassed at Auschwitz.

Martha Hinrichsen: Legally, it was a sale. Morally and ethically is another question.

Morley Safer: But with the seller having no choice.

Another painting Gurlitt had was "Two Riders on the Beach" by Max Liebermann now valued at more than a million dollars. David Toren, now 88 and blind, left Germany on a Kindertransport days before the war began. He last saw the painting at his uncle's home in Breslau just before his father was arrested by the Nazis. Both parents were murdered at Auschwitz.

David Toren: There came two guys from the Gestapo-- "We have instructions to-- to take you to Gestapo headquarters." That day, I remember every little detail. I was sitting in the anteroom at the Winter Garden and looked at the picture and that was the last time I saw that picture.

Toren had been searching for any trace of his family's art collection, but all he found was a 1939 Nazi inventory that mentions the Liebermann painting.

David Toren: The letter says that the action to confiscate art owned by Jews has been very successful, but there's still some rich Jews left. And the first example, he mentions my uncle. And the letter ends with, "I want the Jew, David Friedman, not to dispose of any of the art objects until we come back."

After the war the Allies' art recovery unit, "The Monuments Men," found and returned millions of artworks.

They also found Hildebrand Gurlitt hiding out in this Bavarian castle owned by a local Nazi party leader. Inside were hundreds of treasures Hildebrand and his young son Cornelius had hidden. Many more were apparently stashed in hiding places all over Germany.

Morley Safer: The Monuments Men took some of his paintings but they let him keep most of his collection, did they not?

Willi Korte: That's an unresolved mystery. I think up to this day he was able to produce one story after another about how he had acquired these before the war and for reasons that I have a hard time understanding is he got away with it.

Among the artworks in that castle was David Toren's uncle's painting. Hildebrant Gurlitt told the Monuments Men it was a gift from his parents before the war, and that painting--like most of the others-- was returned to him.

Morley Safer: But was he as innocent as he claimed?

Vanessa Voigt: Most of these artworks were stolen, I think. Confiscated from Jewish families or stolen, yeah.

Hannes Hartung and Tido Park, two lawyers who have represented Cornelius Gurlitt, say the sins of the father should not be visited on the son.

Hannes Hartung: Hildebrand Gurlitt wasn't completely innocent. That's for sure. And not there are cases we will deal 'em in a fair manner because you know, under German law, morality has nothing to say. This-- no, I'm sorry to tell you, but the German law, it's a law which has not been made for the horrible outcome of the Third Reich and all that happened. So now what we are talking about now is about morality and how to deal with moral responsibility.

German law puts a 30-year statute of limitations on stolen property so the works -- by law -- remain the property of Cornelius Gurlitt. As for the art itself, authorities won't explain why they kept the discovery a secret for nearly two years.

Morley Safer: How strong is the government's criminal case against him?

Tido Park: They really don't have a strong case. They pretend to have a case because they have, of course, to justify the seizure of the whole collection.

Right now the collection is in the hands of a task force which is examining each work for evidence of looting. Ingrid Bergreen-Merkel heads up the task force. Uwe Hartmann is the chief researcher. He says even as Germany was collapsing in 1945 the Nazis were dutifully recording the art thefts.

Morley Safer: Why did they keep these records of the evidence of their own crimes?

Uwe Hartmann: That's the German gründlichkeit. To do his duty--

Uwe Hartmann: --until the last day.

The task force is initially examining 590 works as potentially looted from Jews -- including this Matisse which was looted from Jewish art dealer Paul Rosenberg in 1941.

Morley Safer: Beyond the minutiae of legality, there's a larger question and that's the moral question.

Ingrid Bergreen-Merkel: Eighty years after Hitler took over. Seventy-five years after the synagogues burned in German. Yes, we know. That's the moral obligation. And we take it seriously. Very seriously. On the other side, there are the laws.

Morley Safer: So you're not making judgments.

Ingrid Bergreen-Merkel:: No. We are not a court. We can't. We mustn't.

Ingrid Bergreen-Merkel:: Mr. Gurlitt told me when I talked to him, he said, "What's-- what's been taken away? What had been robbed?" That was his words. "Has to be given-- back."

Cornelius Gurlitt -- who is recovering from a heart operation -- says the collection is rightfully his and that his father did nothing wrong. But he says he is willing to negotiate.

Morley Safer: What a lot of people might wonder is there's nothing to negotiate here. These paintings were-- either belonged to German museums, and should go back to those German museums, or to Jews who owned collections and were forced to sell them.

Tido Park: Mr. Gurlitt is absolutely willing to find fair solutions. But what we need of course is clear evidence. Because we have some letters addressed to Mr. Gurlitt saying, "Oh-- look, my grandma had a specific painting 70 years ago in her living room." No evidence, nothing.

As for Martha Hinrichsen, she has filed a claim with the task force but has little confidence she or her family will ever see her grandfather's drawing.

Martha Hinrichsen: Quite honestly, I don't believe in my lifetime, because I think this is going to be a long, long battle.

Cornelius Gurlitt is close to an agreement with the German authorities. He has agreed to give up paintings proven to be stolen and will retain the rest.