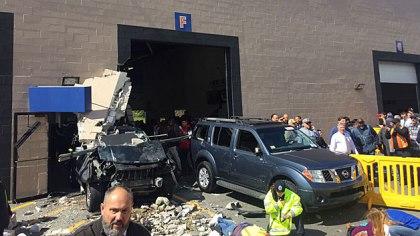 The crash unfolded just after 10 a.m. at Lynnway Auto Auction in Billerica. The Jeep subsequently became lodged into the building wall next to a garage door. The driver sustained injuries from the crash, but has not been hospitalized. An update on his condition was not immediately available.

A man and two women succumbed to their injuries at the scene. Their identities are being withheld pending family notification.

Paramedics say at least nine others sustained critical injuries during the crash.

A preliminary investigation revealed the driver is said to be a man in his 70s who is employed by the company. Authorities say only employees are allowed to drive vehicles through the auction, which is held every Wednesday.

"As the vehicle began to enter the building it suddenly accelerated," said Middlesex County District Attorney Marian Ryan. "[It] traveled through the inside of the building at a high rate of speed and ultimately crashed into a cinder block wall."

Several hundred employees were present when the crash took place.

Detectives do not believe the incident was intentional.

A witness at the scene, who only identified himself as Geraldo, told CBS Boston he was inside of the building when the crash occurred. He said he saw a vehicle "speeding up through the auction," but it appeared to have been an accident.

"It hit the wall all the way to the end," Geraldo said. "Its a concrete wall. So many people are hurt. It happened so quick and it was so much damage because there are just so many people."

Car dealer Wissam Merhab said he believes the gas got stuck in the Jeep, causing it to speed through the crowd.

An employee at the auction house said another worker was moving the Jeep when he lost control. The employee and another witness both said the driver appeared to be an elderly man.

The cause of the collision remains under investigation.