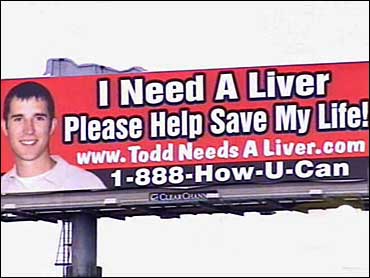 When childhood sweethearts Todd and Julie Krampitz got married this spring, it seemed like they had it all. That was before Todd was diagnosed with terminal liver cancer. Instead of waiting for an organ donor the traditional way, the couple took bold action, buying two billboards in Houston, asking people to help save Todd's life.

The message is simple: "I NEED A LIVER - PLEASE HELP SAVE MY LIFE" for all the world to see.

On The Early Show, Todd told co-anchor Hannah Storm, "Ever since the billboards have gone up, the phone hasn't stopped ringing and constantly answering e-mails and getting calls from people. It's been non-stop."

What have his doctors told him, in terms of needing a new liver, and how long he can last with his current liver? (There is cancer on both lobes of his liver.)

"They haven't given us a timeline right now," he said. "Basically, it's just a wait-and-see. We're having to wait to get a liver. And it's all we can do right now."

Adds his wife, "They're not actually looking at much time. They won't tell us. We asked bluntly, but they won't give us a timeline and have said the cancer is so advanced that the hope is bleak unless we get a transplant."

Where are they on the waiting list? Have they gotten any indication of how long it might take to get a liver?

Said Julie, "Actually, Todd is at the bottom of the list because, again, the hope is bleak. And they said he would get a diseased liver by just waiting on the list. So we are trying to give all our effort possible, if anyone is out there who has had an unfortunate tragedy or is on life support, they can donate the organs and direct the liver to Todd by talking to their local organ procurement organization. And they'll help over 70 lives by donating organs and tissue."

Why did Todd decide to take this step of buying billboard ads?

"Well, basically, the doctors said we were at the bottom of the list, and we don't have time to be waiting around," he replied. "My liver is huge. It's taking up…most of my insides. So we don't have a lot of time."

He added that his sister is the one who came up with the idea for the billboards.

Further information may be obtained at the Web site toddneedsaliver.com.