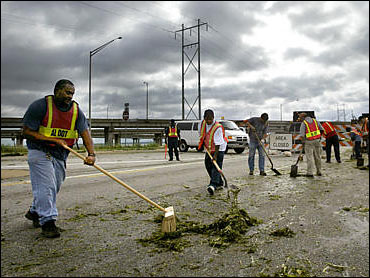 A fishing boat crewman was missing Tuesday in the Gulf of Mexico and thousands of homes and business had no electricity in the wake of Tropical Storm Bill, which blew across the South with wind and record rainfall.

Some customers were likely to be without power until Wednesday, utilities said. A quarter of one Louisiana town was flooded after its levee broke - for the second time in less than a year.

The weakening remnants of Bill, the second tropical weather system of the year, had been downgraded to a tropical depression Tuesday as it followed a diagonal track across the South.

The storm was blamed for one death, a man killed by a falling tree limb in Atlanta.

Bill plowed ashore Monday afternoon in southern Louisiana with sustained wind of about 60 mph, short of the 74 mph minimum for a hurricane.

By 11 a.m. Tuesday, the storm's sustained wind had slowed to 30 mph. It was centered near Tuscaloosa, Ala., and was heading toward the northeast at about 16 mph, the National Hurricane Center said.

About 73,000 homes and businesses had no power Tuesday in southeastern Louisiana. That was down from a peak of about 224,000 early in the day.

High water during the storm flooded the only road to the coastal sport fishing and beach town of Grand Isle, stranding residents and vacationers, including U.S. Sen. Mary Landrieu. State police reopened the road Tuesday after the water receded.

The storm's biggest threat was heavy rain in a region where the ground already was saturated by a series of storms.

Rainfall included a record 5.72 inches by late Monday at Mobile, Ala., about four times the previous record for the date. New Orleans got 4 to 6 inches, with up to 10 inches in isolated spots east of the city, the weather service said.

On Tuesday, northwest Georgia got more than 4 inches of rain and up to 5 inches more was possible. A flash flood watch was posted for the entire Atlanta area.

Pascagoula, Miss., got 8 inches of rain by noon Monday and radar indicated 12.8 inches in the Van Cleave area, said Robert Ricks, a weather service meteorologist in Slidell. However, flooding in Mississippi was limited, officials said.

A levee protecting the southern Louisiana town of Montegut broke Monday night, flooding about a quarter of the streets and some homes, fire chief Spencer Rhodes said. The levee also failed last fall during Hurricane Lili, and Rhodes said repair work had only weeks ago because of bureaucratic holdups.

Angry residents immediately circulated a petition calling for a class-action lawsuit against the levee board, he said.

One person was seriously hurt when a tornado tore up a mobile home in Reserve, 38 miles from New Orleans, said Van Gilmore, assistant director of civil defense in St. John the Baptist Parish.