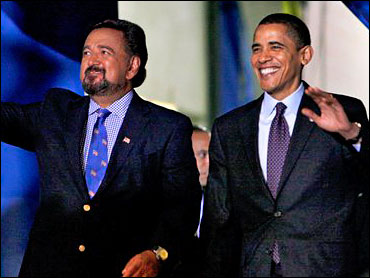 The official says Obama plans to announce Richardson's selection after Thanksgiving. The official spoke on condition of anonymity because the official was not authorized to speak publicly about the negotiations.

Richardson was energy secretary and U.N. ambassador under President Bill Clinton. Richardson would be the most visible Hispanic named to Obama's Cabinet.

Richardson ran for the Democratic nomination but dropped out in January and endorsed Obama.

Obama is set to make the formal announcement of the top members of his economic team tomorrow.

Geithner would have chief responsibility for tackling the economic slowdown and credit crunch. At the New York Fed, he has played a critical role in the government's response to the financial crisis and has worked closely with Treasury Secretary Henry Paulson and Ben Bernanke, the Fed chairman.

Summers, 53, treasury secretary under President Bill Clinton and one-time president of Harvard University, will advise Obama from the White House.

The men will confront an economic crisis that continues to deepen in spite of hundreds of billions of dollars in federal emergency spending in recent weeks.

If confirmed by the Senate, the 47-year-old Geithner takes over the Cabinet job of administering the next administration's perilous mission to stem the economic nose dive and restore financial equilibrium.

Both men will appear with Obama at a Monday news conference in Chicago.

The move followed in one-two fashion Obama's declaration on Saturday that his administration planned to create 2.5 million jobs over the next two years.

Obama wants Congress to approve it quickly to approve the recovery plan so he can sign it shortly after his Jan. 20 inauguration.

"These aren't just steps to pull ourselves out of this immediate crisis. These are the long-term investments in our economic future that have been ignored for far too long," Obama said in the weekly Democratic radio address on Saturday.

He called the plan "big enough to meet the challenges we face" and said that it would kindle job creation and shore up the nation's economic foundation.

"We'll be working out the details in the weeks ahead, but it will be a two-year, nationwide effort to jump-start job creation in America and lay the foundation for a strong and growing economy," Obama said.

The announcement of the appointments comes as Obama moves quickly to fill slots for his incoming administration.

On Saturday, Obama named longtime spokesman Robert Gibbs as White House press secretary. Gibbs went to work for Obama's Senate campaign in 2004 and was communications director while Obama was in the Senate.

The president-elect is virtually certain to offer Congressional Budget Office chief Peter Orszag the job of directing the White House Office of Budget and Management, and Orszag is likely to accept, Democratic officials said Saturday.