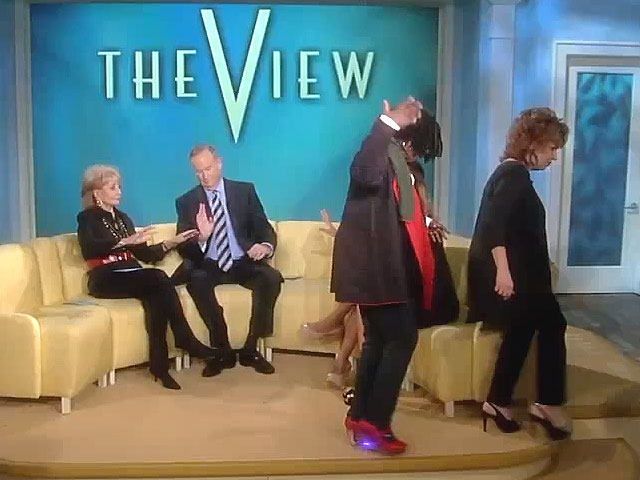 NEW YORK (CBS) Bill O'Reilly got into a heated discussion on "The View" and his comments about the mosque near Ground Zero prompted two of its co-hosts to walk off camera while the show was on the air.

The Fox commentator was a guest on ABC's talk show Thursday to promote his new "Pinheads and Patriots" book. The discussion got increasingly heated over the "Ground Zero Mosque" debate and he later went on to say "Muslims killed us On 9/11."

Co-Host Whoopi Goldberg disputed O'Reilly's claims that the mosque was inappropriate. "There were 70 families who are Muslim who also died in that building," she said.

"Seventy percent of Americans don't want that mosque down there, so don't give me the 'we' business," said O'Reilly to co-host Joy Behar; the studio audience applauded.

Afterward, when pressed by Goldberg and Behar to explain why the "Ground Zero mosque" was somehow "inappropriate," O'Reilly leaned over and pointed at Goldberg saying, "Muslims killed us on 9/11."

"That is such bullsh*t," Goldberg exclaimed in the midst of a cacophony of back-and-forth yelling.

Goldberg shouted "What religion was Mr. McVeigh? [referring to Timothy McVeigh, the convicted American-born terrorist who blew up the Oklahoma City Building in 1995] Mr. McVeigh was an Extremist as well and he killed people," before she and Behar walked off the set in protest. They later came back to finish the show.

Barbara Walters criticized her co-hosts for walking off stage during the live show. But she said O'Reilly should make the distinction that extremists committed the terrorist act.

Behar and Goldberg returned after O'Reilly said that "if anyone felt that I was demeaning all Muslims, I apologize."

Watch Bill O'Reilly on the Oct. 14 Episode of "The View":