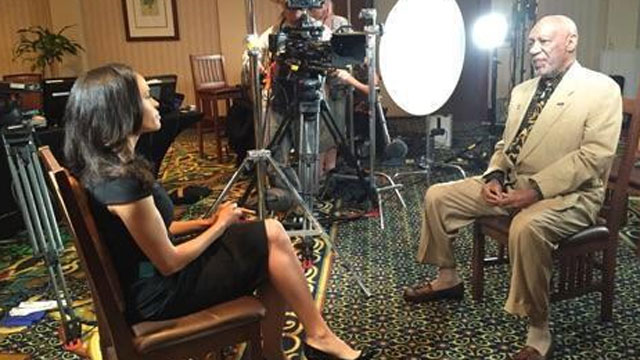 After over 30 women have accused Bill Cosby of sexual misconduct, with many alleging he drugged and assaulted them, the 77-year-old comedian sat down for his first TV interview.

"Good Morning America's" Linsey Davis caught up with Cosby in Alabama where he was working with the Black Belt Community Foundation to raise awareness about underfunded schools in Selma, Ala. and was also speaking with students.

Davis asked the embattled comedian how he planned to respond to children who may ask about these allegations against him. "Are you prepared for the backlash if a young person comes up to you and says my mom said you did some bad things?" she inquired. "How will you answer that if they are pressing you?"

"I'm not sure that they will come like that," he said. "I think that many of them say, 'Well, you're a hypocrite. You say one thing, you say the other.' My point is ...I'm telling you where the road is out. ...Do you wanna go here or do you wanna be concerned as to who is giving you the message?"

"The Cosby Show" star started to get emotional when addressing the media firestorm surrounding him over the past six months. "Are you concerned at all given the allegations that that may overshadow your message?" Davis asked.

"I have been in this business 52 years and I've never seen anything like this," he said. "Reality is a situation and I can't speak."

As for how he sees this affecting his legacy, Cosby doesn't seem worried. "I don't really know about what I'm going to do tomorrow," he told Davis. "I have a ton of ideas to put on television about people and their love for each other."

More of Cosby's interview will air tonight, May 15, on ABC's "Nightline."

Cosby has denied all allegations made by these women and has not been criminally charged.

This past year, former model Janice Dickinson alleged that Cosby had sexually abused her. "The next morning I woke up, and I wasn't wearing my pajamas, and I remember before I passed out that I had been sexually assaulted by this man," she told ET. "... Before I woke up in the morning, the last thing I remember was Bill Cosby in a patchwork robe, dropping his robe and getting on top of me. And I remember a lot of pain."