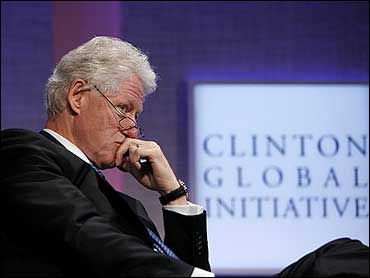 Today's global food crisis shows "we all blew it, including me when I was president," by treating food crops as commodities instead of as a vital right of the world's poor, Bill Clinton told a U.N. gathering on Thursday.

The former president, addressing a high-level event marking Oct. 16's World Food Day, also saluted U.S. President George W. Bush - "one thing he got right" - for pushing for a change in U.S. food-aid policy. He chided the bipartisan coalition in the U.S. Congress that killed the idea.

Clinton took aim at decades of international policymaking by the World Bank, the International Monetary Fund and others, encouraged by the U.S., that pressured Africans in particular into dropping government subsidies for fertilizer, improved seed and other farm inputs, in economic "structural adjustments" required to win northern aid. Africa's food self-sufficiency subsequently declined and food imports rose.

Now skyrocketing prices in the international grain trade - on average more than doubling between 2006 and early 2008 - have pushed many in poor countries deeper into poverty.

U.N. Secretary-General Ban Ki-moon told the U.N. gathering that prices on some food items are "500 percent higher than normal" in Haiti and Ethiopia, for example. The U.N. Food and Agriculture Organization estimates the number of undernourished people worldwide rose to 923 million last year.

"Food is not a commodity like others," Clinton said. "We should go back to a policy of maximum food self-sufficiency. It is crazy for us to think we can develop countries around the world without increasing their ability to feed themselves."

He noted that northern food aid could itself be a tool for boosting African agriculture.

Canada, for example, requires that 50 percent of its aid go as cash - not as Canadian grain - to buy crops locally in Africa or other recipient countries. But U.S. law requires that almost all U.S. aid be American-grown food commodities, benefiting U.S. farmers. Bush proposed earlier this year that 25 percent of future aid be cash.

"A bipartisan coalition (in Congress) defeated him," the Democratic ex-president said of his Republican successor. "He was right, and both parties that defeated him were wrong."

"If we're going to do biofuels, we ought to look at the more efficient kind," he said, referring, for example, to the jatropha shrub, a nonfood source that grows on land not suitable for grain.

D'Escoto expressed disappointment that of $22 billion pledged by richer nations to help poorer nations' agriculture in this year of food crisis, only $2.2 billion has been made available.

"While the international community is focused on turmoil in the global economy, I am extremely concerned that not enough is being done to help those who are suffering most: the poorest of the poor," he said.