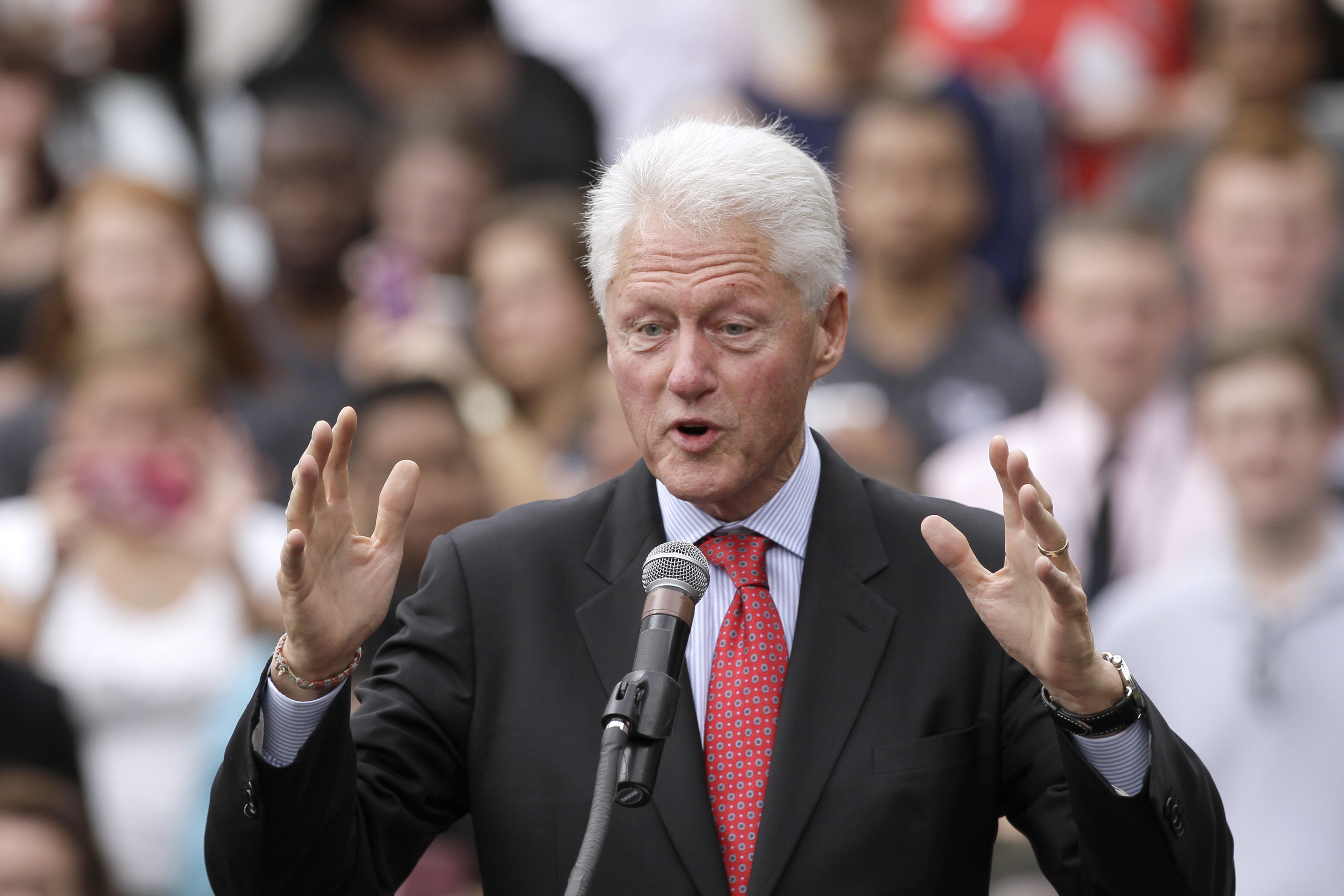 CONWAY, Ark. - Former President Bill Clinton urged voters in his home state Monday not to use the midterm election as a protest against the White House, as he toured the state to help Democrats' efforts to prevent a GOP takeover in Arkansas.

Clinton kicked off a series of rallies in Arkansas on Monday, praising Democratic candidates in close races for U.S. Senate, House and governor as people willing to work with both parties for the good of the state. He also criticized Republicans' efforts to tie Democrats to President Barack Obama, who lost Arkansas in the 2008 and 2012 presidential elections and remains deeply unpopular in the state.

"They want you to make this a protest vote," Clinton told a crowd gathered at the University of Central Arkansas campus. "All three of these races, they're saying 'you may like these guys, but hey, you know what you've got to do. You've got to vote against the president. After all, it's your last shot.'"

Clinton appeared with Democratic U.S. Sen. Mark Pryor, who is locked in a tight and expensive fight for a third term against Republican U.S. Rep. Tom Cotton. The race could decide which party controls the U.S. Senate next year. Former North Little Rock Mayor Pat Hays, who is running for a central Arkansas congressional seat, and gubernatorial nominee and former U.S. Rep. Mike Ross, also shared the stage with Clinton.

Noting that the president only has two years left on his term, Clinton added: "It's a pretty good scam isn't it? Give me a six year job for a two-year protest. That's Mark Pryor's opponent's message."

Clinton's visit comes as Republicans in Arkansas and other key states are seizing on the president's recent remarks that though he's not on the ballot, his policies are. A spokesman for Cotton cited those remarks as he downplayed Clinton's visit and continued trying to paint Pryor as too closely aligned with Obama.

"We're not bothered by President Clinton's support of Senator Pryor," Cotton spokesman David Ray said in an email. "What bothers us, and should bother all Arkansans, is Senator Pryor's lock-step support of President Obama's agenda, which he has supported 93 percent of the time -- including on Obamacare, the failed stimulus bill, the Wall Street bailout, judicial nominees -- you name it."

Pryor, the only Democrat in the state's federal delegation, accused Cotton of representing out-of-state groups more than the voters - a common theme during his re-election bid.

"He has his billionaires, but you know what I have? I have you," Pryor said. "I have the people of this state and that's how we win this race."

Clinton remains a beloved figure in Arkansas, where his presidential library is located and where the Little Rock airport is named for him and former first lady Hillary Rodham Clinton.

He also boasts longstanding ties with the state's top candidates this year. Pryor's father, David, is a former governor and U.S. senator who was Clinton's mentor. Ross got his start in politics driving Clinton around the state during the 1982 gubernatorial campaign. Hays is a longtime friend and supporter of Clintons.

Clinton's visit comes after a string of high-profile Republican surrogates campaigned in the state, including former Florida Gov. Jeb Bush and former presidential nominee Mitt Romney. The visits were designed in part to highlight the president's unpopularity in Arkansas.

Clinton also used his speech to praise Democratic Gov. Mike Beebe, who has remained popular in the state despite Republicans' recent gains, and compared the state's top candidates to him.

Clinton also planned to headline a rally in Jonesboro on Monday, and two more in northwest Arkansas on Tuesday. The tour kicked off on the deadline to register to vote for the Nov. 4 election, and two weeks before early voting begins.