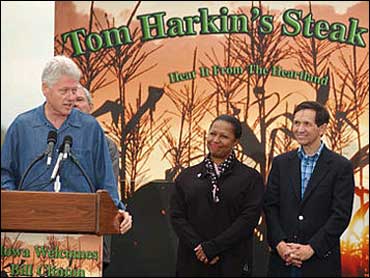 No more junk food for Bill Clinton - at least not right now.

The former president, whose White House tenure was accompanied by the staples of America's fast-food industry, showed up at his Harlem office Wednesday looking lean, but not mean.

With a wide grin on his face after a news conference to announce a new AIDS initiative, he deadpanned: "No beer." His dark business suit jacket swung open to reveal a flatter stomach, replacing the onetime presidential paunch.

Mr. Clinton says he's been following "The South Beach Diet," and "working out with a German man." He declined to divulge how many pounds he's lost.

A Florida doctor, Arthur Agatston, created the best-selling weight-loss program by slashing carbohydrates and fats such as processed starches and sweets.