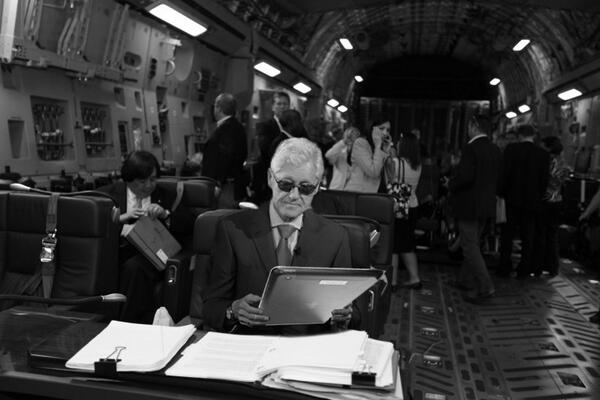 Former President Bill Clinton may have made it to the White House before his politically-inclined wife, but he's the one following her lead with a new Twitter profile photo that spoofs a popular snap of Hillary Clinton.

The photo, which Bill Clinton posted on Twitter Monday night, shows the former president in sunglasses, perusing an oversized tablet. The image shares the same background as Hillary Clinton's profile photo, which features her scanning her BlackBerry, also in sunglasses, on a military plane with a stack of documents in front of her.

The image of Hillary Clinton was featured on the blog "Texts from Hillary," which imagined various conversations the then-secretary of state might have been having with other famous people. When she finally launched her own Twitter account after retiring from her position in the Obama administration, she used the photo for her profile picture and thanked the creators of the blog, writing in her first Tweet, "I'll take it from here...".

"I'm following my leader!" Bill Clinton wrote when he posted his own photo. He also added one more title to his profile: "meme appropriator."

Hillary Clinton responded on Tuesday, retweeting her husband's photo and adding, "Well, that explains what happened to my iPad!"