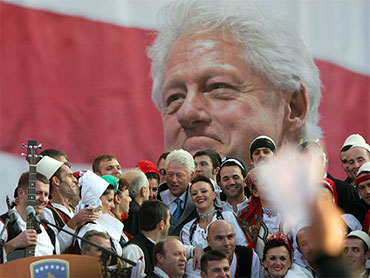 Thousands of ethnic Albanians braved low temperatures and a cold wind in Kosovo's capital Pristina to welcome former President Bill Clinton on Sunday as he attended the unveiling of an 11-foot statue of himself on a key boulevard that also bears his name.

Clinton is celebrated as a hero by Kosovo's ethnic Albanian majority for launching NATO's bombing campaign against Yugoslavia in 1999 that stopped the brutal Serb forces' crackdown on independence-seeking ethnic Albanians.

This is his first visit to Kosovo since it declared independence from Serbia last year.

Many waved American, Albanian and Kosovo flags and chanted "USA!" as the former president climbed on top of a podium with his poster in the background reading "Kosovo honors a hero."

Some peeked out of balconies and leaned on window sills to get a better view of Clinton from their apartment blocks.

To thunderous applause Clinton waved to the crowd as the red cover was pulled off from the statue.

The statue is placed on top of a white-tiled base, in the middle of a tiny square, surrounded by communist-era buildings.

"I never expected that anywhere, someone would make such a big statue of me," Clinton said of the gold-sprayed statue weighing a ton.

He also addressed Kosovo's 120-seat assembly, encouraging them to forgive and move on from the violence of the past.

The statue portrays Clinton with his left arm raised and holding a portfolio bearing his name and the date when NATO started bombing Yugoslavia, on March. 24, 1999.

An estimated 10,000 ethnic Albanians were killed during the Kosovo crackdown and about 800,000 were forced out of their homes. They returned home after NATO-led peacekeepers moved in following 78 days of bombing.

Leta Krasniqi, an ethnic Albanian, said the statue was the best way to express the ethnic Albanians' gratitude for Clinton's role in making Kosovo a state.

"This is a big day," Krasniqi, 25 said. "I live nearby and I'm really excited that I will be able to see the statue of such a big friend of ours every day."

Clinton last visited Kosovo in 2003 when he received an honorary university degree. His first visit was in 1999 - months after some 6,000 U.S. troops were deployed in the NATO-led peacekeeping mission here.

Some 1,000 American soldiers are still based in Kosovo as part of NATO's 14,000-strong peacekeeping force.

NATO officials said the peacekeepers were also on alert, although no additional security measures were taken.