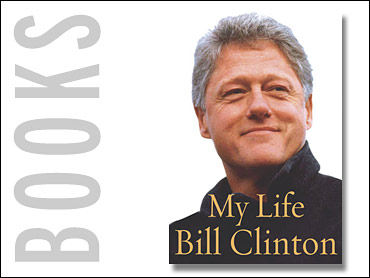 Former President Bill Clinton has finished writing his memoirs and has submitted the completed manuscript to editors. The book's cover was sent to retailers Tuesday as the publisher begins taking orders for the expected best seller.

The book, "My Life," will run an estimated 900 pages and is due out in late June. The former president received a reported $10 million to $12 million advance, and the book has a first print run of 1.5 million copies.

The former president is expected to begin recording the audio version of "My Life" next week. The abridged audio version is seven hours long, on six compact discs. The audio book will have a retail price of $35, as will the hardcover.

The cover of the book features Mr. Clinton's smiling in front of a white background as he gazes into the distance.

Knopf has already received over 500 requests for personal signing appearances by the former president, and are trying to schedule signings and media appearances to promote the book.

Nearly 1.7 million copies of former first lady Hillary Rodham Clinton's book "Living History" are in print, in addition to more than half a million paperback copies. Her book revisited her public policy battles over health care and her pain over her husband's relationship with intern Monica Lewinsky.

Historians expect that the former president's book will seek to defend Mr. Clinton's record and preserve the future political viability of his wife, who has been mentioned as a possible presidential candidate in 2008.