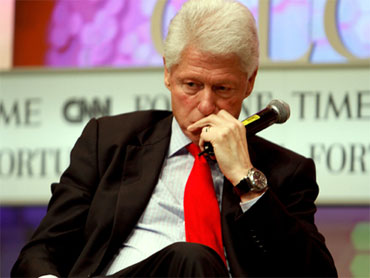 Former U.S. President Clinton expressed frustration Saturday over the slow pace of Haiti's earthquake recovery, but said the country will escape its difficulties if it can become self-sufficient.

In a phone interview with The Associated Press ahead of the six-month anniversary of the Jan. 12 quake, Mr. Clinton said international donors have given only 10 percent of the aid they promised. He also noted the "enormous difficulty" plaguing rubble removal and construction of housing.

Mr. Clinton called the struggle to provide homes for the 1.6 million Haitians still living under tarps and tents "horribly frustrating."

"In the next couple of months we will start working through that at a more rapid pace and getting some of these other things going," Mr. Clinton said. "They have enormous potential."

That will require resolving a number of issues, including fights between Haitian officials and landowners over space. It also will require money.

Mr. Clinton is co-chairman of the international commission overseeing $5.3 billion in promised reconstruction aid. But he said only a small piece of the promised amount has materialized - most of it as debt relief instead of cash.

So far money has actually been provided by Brazil, Norway and Australia. The United States has paid into the donor fund as well, but only $30 million of the $1.15 billion it promised. Legislation approving the rest is tied up in Congress.

Mr. Clinton said he planned to contact donors next week to remind them of their promises, especially those who pledged to give money directly to Haiti's government.

"We need a schedule at least from the donors of when they are going to give that money," he said.

Mr. Clinton's frustrations are shared on the streets of Port-au-Prince, where little has changed since the early weeks after the earthquake killed 230,000 to 300,000 people, according to Haitian government estimates.

Mountains of rubble still block some streets and fill lots needed for construction. Of the estimated 20 million cubic yards (17 million cubic meters) of rubble created by the magnitude-7 disaster, only 2 percent has been trucked away.

"We are still having enormous difficulty taking this rubble removal up to scale," Mr. Clinton said. "We need both more heavy equipment and more people working in the cash-for-work programs. And we need to be very creative about where we put this stuff."

Mr. Clinton was deeply involved in Haiti's affairs when he was U.S. president, overseeing both a crippling embargo against military rulers and sending U.S. troops to restore an ousted leader to power. He was named U.N. special envoy to Haiti last year to promote economic growth.

Despite heart problems and the enormous difficulty of working in post-quake Haiti, Mr. Clinton has not only persisted but expanded his role, saying he is optimistic about the country's future.

"Haiti will be viewed as a unique cultural and historical site in a region that is prospering, by working together as never before and by standing on its own two feet as never before," he said.

Getting there means helping create a functioning, stable society, something Haitians haven't had for generations.

"They want to be able to live in a place that works," Mr. Clinton said. "Their goal is not to need any of us anymore."