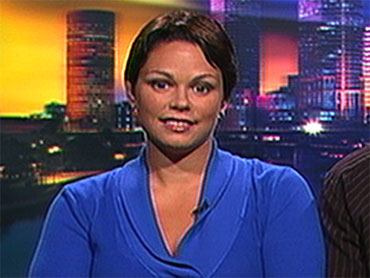 "The Biggest Loser" has been a big ratings winner since its debut in 2004, and when you add best-selling cookbooks and workout DVD's, the show brought in an estimated $100 million last year.

But now there are disturbing allegations about the program's truthfulness, and its treatment of contestants.

Kai Hibbard thought she was a changed woman at the end of season three of "The Biggest Loser," the reality show that rewards $250,000 to the contestant who sheds the most pounds.

Hibbard said at the show's conclusion, "I'm not the same person I was when I got here, and that's a miracle. It's an amazing amazing thing."

But Hibbard says reality hit her after the show.

While she lost 118 pounds on the show, she ended up gaining more than 70 of it back.

Molly Carmel, director of Greenlight at Wilkins Center in Greenwich, Conn., said, "It's in no way normal to lose 118 pounds in a 12 week amount of time. Even with surgery, that would be a lot of weight to lose."

Hibbard claims that contestants on the show were pressured to exercise even when severely injured, and to diet by dehydration. She says they were also told to ignore the advice of nutritionists and listen to the show's trainers.

In addition, Hibbard said on "The Early Show" Friday she didn't lose weight at the rate seen on the show.

She explained, "I have people that come up to me and talk to me and ask me why they can't lose 12 pound in a week when I did. When I didn't. It didn't happen. It's TV. So, if I'm going to be grateful and be an inspiration, at the same time I need to take blame and responsibility for the fact that I helped perpetuate a myth that's dangerous."

When pressed about the rate at which she did lose weight, Hibbard said, "A week is not a week on TV. ... I'm saying that it would be most times longer than a week. And I believe once in my season it was less than a week. Not always a week."

Hibbard continued, "The weight loss for that show is for ratings. People have to remember that 'The Biggest Loser" isn't a weight loss camp that happens to be filmed for TV. It's a TV show that's made to look like a weight loss camp. So, there was pressure from production and everybody involved in the show to make sure you had as big numbers as possible every week. And I could tell you that before I went on the show I never learned how to dehydrate to manipulate a scale. And I left knowing how to do it better than some fitness competitors that I know."

Hibbard said she also left the show with severe issues about her weight.

"I left with a very poor mental body image," she told "Early Show" co-anchor Erica Hill. "I found myself loathing what I looked like the more weight I dropped because of the pressure on me. And I found myself doing things like considering coffee a meal. And because of the mentality that I was surrounded with, and the pressure that was given at that show, it was considered acceptable to behave that way. I take full responsibility for everything that I've done. But you can't understand it unless you understand the pressure that was there."

Hibbard's husband, Jake Zwierstra, who met Hibbard during the show's filming, also saw a change in her that went beyond her weight.

"I saw a transformation in her," he said. "Every time she flew out, she looked different. She was just always so very busy and going to the gym. Really all she would eat was coffee. Coffee, splenda, no cream, because that wasn't healthy. So, she never slept. Just always fretted about, you know -- special ordered everything, no cheese, no -- nothing that a normal person would do."

Hibbard's said her condition worsened to the point where her family and friends, some of whom are health professionals, staged an intervention.

"She came back with her hair falling out, Zwierstra said. "We finally all sat down and was like, 'This isn't healthy for you.' We talked to a trainer. They kind of reeled her in and made her eat healthy."

Hibbard said, "What I like to talk about most when I talk about the show is that, first of all, (is) how grateful I am to be a part of something that inspired so many people. Don't for one second I'm not grateful (for 'The Biggest Loser'). At the same time, if I'm going to be grateful for my part in inspiring people, I need to take responsibility for the fact that I participated in a myth that hurts people."

Hill pointed out that Hibbard says she's not trying to make money from her claims, but that she risks losing a lot of money because she signed contracts with the show.

Hibbard replied, "I made a deal with myself after that finale that I was such a coward at that finale that I didn't speak out and tell the truth about how awful it was, that if anybody came and asked me from that point on, I would tell the truth. I've turned down money for interviews. I am putting my family at financial risk to tell the truth about what happened to me. I'm going to get lots of hate mail. ... When you send it, please make sure you spellcheck it. That's 'fame whore' spelled with a 'w.' But, seriously, it's because I participated in something that I feel is harmful to so many people, so I own responsibility to make it better. I'm not making any money off this. I am not getting anything out of it except for the fact that maybe I'm redeeming myself a little bit for being too much of a coward at that finale."

Hibbard said she has heard from other "Biggest Loser" contestants.

She told Hill, "I have to respect those contestants that had a positive experience with it. I fully respect that was your experience. At the same time, I've heard from at least six that have come in seasons after mine that have had experiences that were just as bad or worse than mine. And either they can't speak out about it or, you know, they just don't want to yet. But they talked to me."

She added, "I'm incredibly blessed and lucky that I have active-duty hero military of a husband that supports me in anything that I do. You know, I have to do this in order to be proud enough as a military wife to stand next to him with what he does every single day."