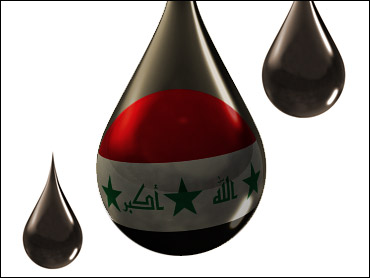 The deals, once signed, are something of a stopgap measure to help Iraq begin to increase production until the country is able to approve a new national oil law - now held up by political squabbles among Sunnis, Shiites and Kurds.

But they also could mark the beginning of an important long-term toehold by big Western companies into Iraq's potentially lucrative oil industry, by giving the companies a bidding advantage over other companies in the future.

Iraq's oil ministry spokesman would not name the companies set to get the deals.

The New York Times reported Thursday that Shell, BP and Exxon Mobil, plus Total, were the four major companies close to signing deals, along with Chevron and some smaller companies.

Ministry spokesman Assem Jihad told The Associated Press in a telephone interview that the names would be announced June 30, after the proposals are sent to the Iraqi Cabinet for final approval.

BP did not immediately return calls seeking comment, and officials at Paris-based Total SA refused Thursday to comment on the report or on any of the company's activities in Iraq. A London-based spokesman for Shell, Adam Newton, said negotiations were ongoing but he declined to release more details, saying they were confidential.

The other two companies could not immediately be reached.

In March, Iraq's Cabinet gave the nod to the Oil Ministry to sign the deals worth around $500 million each. Baghdad hopes to eventually add another 600,000 barrels per day of output to its current 2.5 million barrels per day.

Jihad, who would not discuss details of the contracts, said the deals will be for two years, renewable for a third. The Times reported that the deals were essentially made for the first two years on a no-bid basis.

In the third year, the contracts would be opened to competitive bidding - but the original holders would have an advantage in that bidding, through a clause that would allow them to match bids from competitors to retain the work, the Times reported. It cited the Iraq country manager for a major firm, who spoke on condition of anonymity.

Such a deal would give the original holders of the no-bid contracts an important competitive advantage precisely at the time when Iraq's oil industry would be most likely to take off. It also is occurring at a time when access to undeveloped oil fields is highly prized - as companies seek new sources of production in a tight and expensive oil market.

Oil prices were at about $136 per barrel in trading on Thursday.

The predecessors of the four "majors," as they are called, first had a presence in Iraq in 1920 when they were the original partners in Iraq's Petroleum Company. They lost their licenses when the oil industry was nationalized in 1972.

Iraq sits on an estimated 115 billion barrels and it also has an estimated 112 trillion cubic feet of natural gas reserves, according to the ministry.

Iraq's oil law, one of benchmarks set by U.S. administration to achieve progress toward national reconciliation, will regulate the work of foreign companies in the Iraqi oil sector. But it is stalled over who will have final authority to manage the country's oil and gas fields

Another ministry official, speaking on condition of anonymity because the information is sensitive, said Shell wants to develop the Missan and Kirkuk oil fields, while BP is interested in Rumaila, ExxonMobil in Zubair and Chevron in West Qurna stage 1.

The official added that the Australian BHP Billiton has joined talks through Shell, while French Total has joined through Chevron.

Anadarko, leading a consortium of Vitol Holding and the United Arab Emirates' Dome, has also joined these talks to develop Luhais oil field, he said.