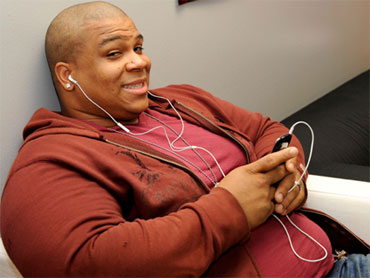 Michael "Big Mike" Lynche made Kara DioGuardi cry and turned the rest of the "American Idol" judges giddy with a moving performance of "This Woman's Work."

Lynche, a mountain of a guy who lives up to his nickname, performed last among the eight male semifinalists Wednesday and emerged as the star of the Fox TV show.

The eight female semifinalists performed Tuesday, with the top six vote-getters from the men's and women's groups to be announced Thursday.

Lynche, 26, of Astoria, N.Y., moved impressively from a quiet falsetto start to a booming finale, but it was as much the story behind the song as his range that touched DioGuardi. Lynche's wife had a baby girl while he was in Los Angeles making the cut for "Idol."

"It's amazing. You were amazing," DioGuardi said. "It's your life right now, it's your respect for your wife, what you've gone through. ... It brought me to tears."

The other contestants, who may have been glad they didn't have to follow Lynche, picked up a mixture of praise and criticism.

Andrew Garcia, 24, Moreno Valley, Calif., had the roughest night, with his performance of "Genie in a Bottle" deemed pitchy by Jackson and dismissed by Cowell as "a little bit desperate."

Casey James, 27, of Fort Worth, Texas, did better with "You'll Think of Me," which Ellen DeGeneres and Cowell said sounded "great" but struck Jackson as a safe choice.

Tim Urban scored with his version of "Hallelujah," which is becoming an "American Idol" standard.

DeGeneres, noting she has been critical of the 20-year-old from Duncanville, Texas, jumped on the stage to give him a congratulatory hug and called his rendition "fantastic."

"Todrick's back!" was Jackson's response to Todrick Hall's performance of "Somebody to Love," while Cowell said it was a mixed performance but may have saved Hall, 24, of Arlington, Texas, from elimination.

"You're becoming a mushy banana. You're ripening so fast," she said. Translation: The 19-year-old from North Richland Hills, Texas, is getting better and better.

Aaron Kelley, with "I'm Already There," showed he has the "makings of a great," Jackson said, and Cowell lauded his emotional delivery - while dismissing DioGuardi's contention the song about a man away from his family was too old for the 16-year-old from Sonestown, Pa.

Lee Dewyze, 23, of Mount Prospect, Ill., showed "there's a star bubbling there" with his version of "Fireflies," said DioGuardi, while Cowell said he was better than the performance but had a "great chance" of making the top 12.

If not, DeGeneres could set him up on a date as a consolation prize: She's heard from several people with crushes on him, she said.